Interplay of Sex and Violence 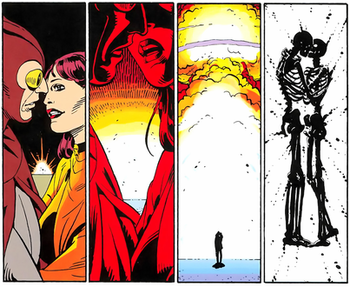 "This is some fucked up foreplay, eh?"
— Bambi "Buck" Hughes to Jason Brody while they're knife-fighting, Far Cry 3
Advertisement:

Sex and violence: two great tastes that taste great together.

You got death, and you got life (conception). You have love and you have hate.

Vampires and the Combat Sadomasochist are particularly prone to this kind of characterization, especially when Hemo Eroticism is involved.

Related to Destructo-Nookie, where the two scenes become one… well, you know what we mean. May involve a Phallic Weapon.

This trope can be the result of a character falling in love with another character's violence.

The distinction between this trope and Sex Is Violence is quite subtle — this trope is about them mixing together, and becoming one somehow. Sex Is Violence is about a character becoming flatly sexually aroused by fighting, to a point where it may stop. It also frequently overlaps with Consuming Passion, which is when the line between sex and cannibalism are blurred.

Compare Life/Death Juxtaposition when the sex relates to a creation motif and the violence relates to a destruction or desolation motif. See Coming and Going when sex and death are happening in the same scene. Not to be confused with Gorn, though they may overlap.