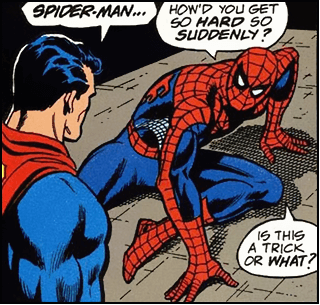 They're talking about fighting, okay!?
"So! They laugh at my boner, will they?! I'll show them! I'll show them how many boners the Joker can make!"
— The Joker, Batman, "The Joker's Comedy of Errors!"note In this context, it actually means a mistake or stupid crime. This definition originated in the 1910s, while the term for an erect penis originated in the 1950s — which just so happens to be when this story was written.
Advertisement:

Believe it or not, not everyone is trying to get crap past the radar. Sometimes, a cigar is just a cigar, there's only a single entendre, and what was meant to be innocent is portrayed completely sincerely.

That doesn't stop the immature among us from occasionally finding things to snicker about.

They were trying so hard. Haha, "hard". It was obvious that nothing dirty was intended, not even in the "wink wink, nudge nudge" sense. And yet... thanks to poor word choice, unusual inflection, bad object placement or some other factor, what was obviously meant to be taken at face value takes on some sexual subtext. Suddenly, an innocent comment about cute little kittens sounds like something out of bad lesbian erotica. It clearly wasn't intentional, but it can cause a viewer to stop in his or her tracks, trying to stem the giggles. It can sometimes be hard to tell if you're dealing with this trope or a case of Demographically Inappropriate Humour, especially if you're dealing with a Stealth Parody.

Distinguished from Innocent Innuendo, which is when the author does this on purpose rather than accidentally, and That Came Out Wrong, when it is only unintentional on the part of the character, the other characters also catch the dirty meaning, and the victim scrambles to explain himself. Contrast Accidental Pun.

See also Have a Gay Old Time, when this happens due to changes in word use. Also see Heh Heh, You Said "X", where this is intentionally invoked and pointed out by another character; this is often (but not always) followed up with That's What She Said. When this supposedly reveals what someone is subconsciously thinking about, that's Freudian Sex—Slip! Freudian Slip!