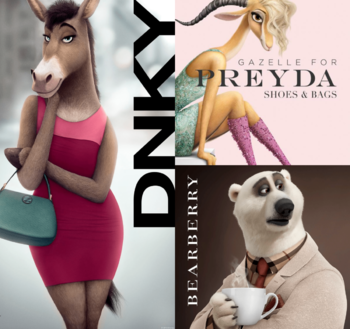 Clockwise from left: DKNY, Prada, Burberry.
Twilight Sparkle: Pinkie, you are not the internet!
Pinkie Pie: Oh, you mean ponynet!
Twilight Sparkle: Not everything has to have the word "pony" on it!
— Ultra Fast Pony
Advertisement:

Flintstone Theming is when a single pervasive concept that is basic to the show is used repeatedly for as many jokes as it can possibly yield, especially with character names. Some shows shoot for the moon and try to make a pun out of everything.

Worldbuilding is sometimes hard. Coming up with an endless string of bad puns based on the concept of your show, on the other hand, is usually pretty easy. At least at first. It gets progressively harder to come up with decent, original puns the longer and longer your show is on the air and the more puns you’ve already used up. The fact that The Flintstones managed to come up with charming puns continually (getting by on charm when originality was not enough) is a major reason why it has had staying power when most other series like this have not.