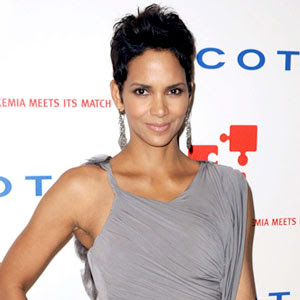 Halle Maria Berry (born August 14, 1966 in Cleveland, Ohio) is an American actress from Cleveland, and is considered one of the most beautiful women in Hollywood. She's a well-rounded actress, whose roles have ranged from slapstick comedy to gritty drama to romance to action to sci-fi. Berry received several awards for the HBO biopic Introducing Dorothy Dandridge, and in 2001 she became the first black woman to win the Academy Award for Best Actress, for her role in Monster's Ball. She has also been involved in the production side of several of her films.

Berry has some notoriety among comic book fans, as while her portrayal of Storm had mixed reception, her performance as Catwoman (2004) was universally panned. She has been a good sport about it, however. When it was announced that she would "win" the Golden Raspberry Award for Worst Actress for Catwoman, she became the second actor (after Tom Green) to accept her Razzie in person, bringing her Oscar along, and parodying her acceptance speech. She received a standing ovation from the audience.

In the 90's and 2000's, she was frequently brought up any time a black man in fiction needed a Celebrity Crush.