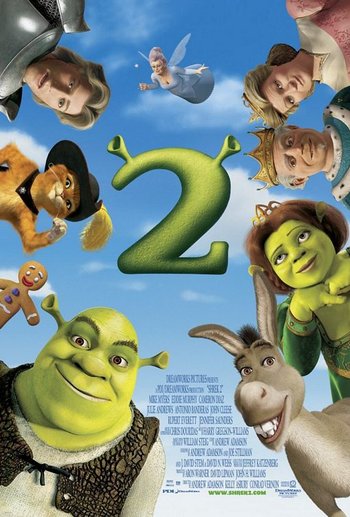 ♫ I need a hero!
I’m holding out for a hero till the end of the night
He's gotta be strong and he's gotta be fast
And he's gotta be fresh from the fight ♫note  Clockwise from top center: Fairy Godmother, Queen Lillian, King Harold, Princess Fiona, Donkey, Shrek, Gingy, Puss in Boots, and Prince Charming.
"Dearest Princess Fiona, you are hereby summoned to the Kingdom of Far Far Away for a royal ball in celebration of your marriage. At which time, the King will bestow his royal blessing upon you and your... (looks up at Shrek) ...Prince Charming. Love the King and Queen of Far Far Away, a.k.a. Mom and Dad."
— Royal messenger
Advertisement:

Shrek 2 was the inevitable 2004 sequel to the DreamWorks Animation Breakthrough Hit Shrek.

It follows ogres Shrek (Mike Myers) and Fiona (Cameron Diaz), now a happily married couple, enjoying their honeymoon. Everything is just fine... until the time comes to Meet the In-Laws. The new couple is summoned by Fiona's parents, rulers of the kingdom of Far Far Away, who wish to celebrate their daughter's marriage. Of course, Donkey (Eddie Murphy) is along for the ride.

Fiona's parents — King Harold (John Cleese) and Queen Lillian (Julie Andrews) — are shocked to learn that their daughter has been transformed permanently into her ogre form, and that she married an ogre to boot. Though they try to accept their daughter's wishes as best they can, King Harold made a deal with Fiona's Fairy Godmother (Jennifer Saunders) a long time ago that Fiona would marry her son, Prince Charming (Rupert Everett), in order to give everyone involved their own happily ever afters. With the patience of the Godmother wearing thin, a desperate Harold hires a hitman, Puss in Boots (Antonio Banderas), to get rid of the ogre and repair this fairy tale gone wrong.

The film was a huge financial success, being the highest grossing film to date for both DreamWorks Animation and its former parent company DreamWorks Pictures, the highest grossing film of 2004, and the highest grossing animated film at the time of its release (before being surpassed by Pixar's Toy Story 3 six years later in 2010); it held an iron grip on the corresponding North American record for twelve years before finally being surpassed by Finding Dory. It was also critically acclaimed, with many crediting the film for surpassing the original in quality. It was followed by Shrek the Third; released in 2007, and Shrek Forever After; released in 2010.