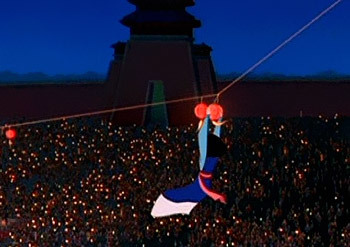 When a character is stuck in a high place of some sort and has nowhere to go but down, he uses anything wire-like to fly down. Gripping onto a wire hanger is a common variation to the trope; however, this is a decidedly horrible idea, as the MythBusters have busted this one's plausibility.

Real ziplines require specific, strong materials for both the line and the thing being held, so that neither one breaks, and so that the friction doesn't stop the slider halfway down the rope.

Not to be confused with Fast-Roping. A supertrope of Bedsheet Ladder.