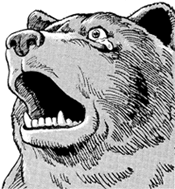 Even bears understand true beauty!
"I'd like to thank the raccoon for channeling the audience's reaction."
— The Nostalgia Chick on Pocahontas
Advertisement:

Turning to an animal, wild or pet, for a Reaction Shot to a comedy moment. Sometimes included in a series of such shots from the humans in the room. Commonly used as a way to revitalize a dying joke.

Occasionally accompanied by an Inner Monologue or subtitled animal noises. The animal in question usually says something entirely unlike what the human character believes it is thinking.

See also Even the Dog Is Ashamed.