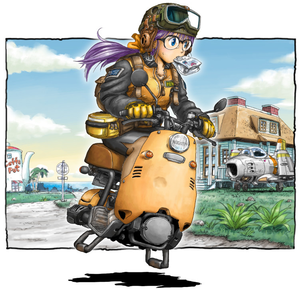 Bikes are cool, and Power Floats, so logically a motorbike that hovers over the ground must be both powerful and cool!

This is a trope where a personal transportation vehicle that is operated vaguely like a conventional motorcycle is fully locomotive without contact with the actual ground. Regardless of how it is justified in-story, this trope is primarily driven by Rule of Cool: a low-flying vehicle can give a much greater impression of speed than a ground vehicle can, the exposure of the operator gives a greater impression of danger and excitement, and shifting weight and listing during turns can give a very dramatic impression of motion.

This trope applies primarily ground-hugging low-flying vehicles, and is likely to be found in a Science Fiction milieu that would justify the mechanical design required. The trope can marginally apply to similar higher-flying vehicles, but if a vehicle is made to fly higher primarily that is more likely to be a Rocket Ride. It exists in a middle ground between the smaller Hover Board and larger Flying Car. It is a technological-themed Sister Trope to its more fantasy-oriented equivalents, the Magic Carpet and Flying Broomstick.