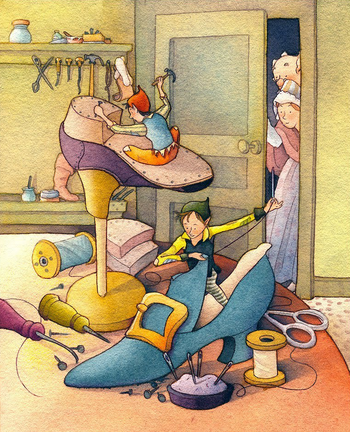 This is the ultimate Old Retainer. He is an actual fairy or any kind of spirit who lives with a human family and takes care of their property. Unlike his rather eccentric cousins back in the old country, he is actually fond of mortals. He ensures that the crops grow, does all kinds of housework, and wards off evil creatures and other unauthorized intruders.

Often, he will serve the same family for generations.

House Spirits in folklore probably go back to ancestor spirits who were believed to stay around their descendants to support and protect them; though once these beliefs were forgotten, they became mere servant creatures.

The recommended way to treat House Spirits varies in different beliefs. Sometimes, you are expected to leave out some milk or some bread for them, and ungrateful mortals may make them angry. Other times, they seem to desire nothing at all than to serve humans, and giving them payments — especially of clothes — may, in fact, drive them away. Yet other kinds only do work when nobody looks, and spying on them makes them leave.