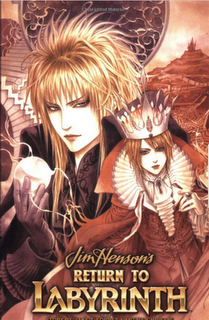 You wish they looked that good.
Advertisement:

A four-part OEL Manga written by Jake Forbes, which is a direct sequel to the Cult Classic film Labyrinth. The first volume was released in August 2006 and the fourth in August 2010.

The plot follows a 16-year-old Toby, whose life has been pretty much ruined by Jareth and his goblin cronies giving him everything he wanted. When his homework is stolen by a small goblin, Toby finds himself in the Labyrinth, where hijinks and adventures give way to Toby having to come to terms to actually living within the Labyrinth, finding friends (and not pissing them off) and somehow figuring out what to do about Lady Mizumi, the Queen of Cups, and her disturbing daughters Moulin and Drumlin...