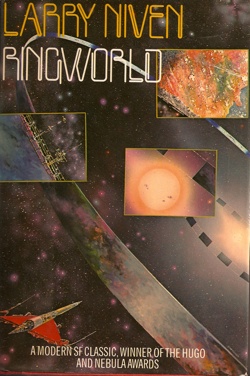 Imagine a giant ring, a million miles wide, with a radius of one Earth orbit and a circumference of some 600 million miles, orbiting around a star. The Ring is far enough out that the heat is comfortable for humans to live on. It spins to mimic gravity, and has walls a thousand miles high to keep the air from spilling off its sides. Such a ring would have an inhabitable surface area equal to almost three million planets the size of the Earth.

It is big. It is huge. Much of the work dealing with the Ringworld is about the difficulties of such a large world. The issues include how it was made, who could have built it, the various societies developed on it over time, and the problem of running it.

It has been adapted into the following games: Ringworld RPG, Ringworld: Revenge of the Patriarch, and Return to Ringworld.

Unrelated to Discworld, though it was a major influence on Terry Pratchett's earlier book Strata.

A Live-Action Adaptation of the first novel is currently in pre-production at Prime Video.