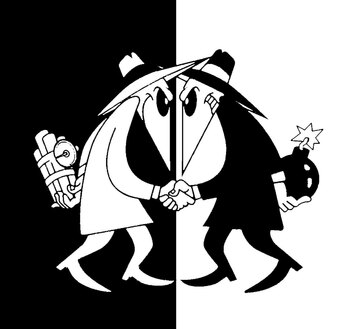 "It is funny how different mirrors reveal different aspects, it must be like people you meet, you get to prefer the ones who show an image of you that you like."
— Alain Bremond-Torrent
Advertisement:

Much like a Foil character mimics tinfoil used by jewelers to emphasize the shine of a gemstone with their differences, a Mirror Character reflects a character's traits to highlight the similarities.

Mirror Characters, also known as Parallel Characters in some literary circles, almost certainly share personality traits, values, similar skill sets, and possibly even goals and likely a narrative arc. They may have the same or similar background, whether they're from the Wrong Side of the Tracks or born a Royal Brat. They might have have shared the same mentor in the past (or even the present). If they have none of the same backstory at all, their similarities will be significant for coming about regardless of their environment.

Think of them like the character versions of Bookends: the similarities serve to highlight something important about the characters and their story.

Typically, Mirrors will be antagonists of some sort, especially an Arch-Enemy. They are almost certainly The Rival, as two characters reflecting each other so strongly on the same side is often jarring. They can be a Sidekick, but as these characters are generally equals, a successor is more likely.

While a Mirror is seen as the literary opposite of a Foil, in truth the tropes often overlap and a character's Foil and Mirror can be the same character. Call them Mirror Foils, and both the Evil Counterpart and Shadow Archetype are often used to create one.

See "Not So Different" Remark for examples where the Mirror relationship is lampshaded in-universe. Contrast Expy for suspiciously similar characters existing in different works in a way that's clearly intended to be a homage—Mirrors have to be in the same narrative. For plot lines that reflect each other, see Plot Parallel. Compare Counterpart Artifacts, which are mirroring objects.

Please note that Mirror Characters have to be characters. Characters who are very similar to a group they don't belong to is not this trope. For two groups that mirror each other, see Mirroring Factions.

Not to be confused with Mirror Match, Left-Handed Mirror, or Mirror Self.