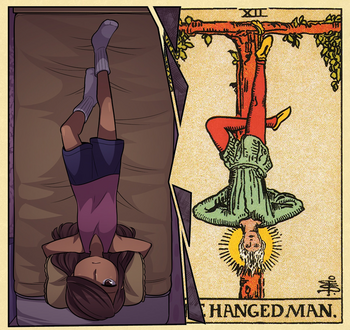 "Whatcha doin'?" "Oh, just hanging around."
The tarot will teach you how to create a soul.
— The Alchemist, The Holy Mountain
Advertisement:

The Tarot (pronounced "TA-row" – rhymes with "sparrow") is a very popular motif in the Urban Fantasy, Ontological Mystery, and Horror genres. It can be used by references or as an item in the setting itself. And, of course, it can be merchandised for fun and profit.

The Tarot is a deck of cards which evolved in parallel with the Card Games during the Renaissance (although expect its source to be much more ancient in any setting that likes Ancient Conspiracy and old mythological references). They're made of 22 Major Arcana and 4 suits of 14 Minor Arcana.

The cards are named after the games they were (and still are) used to play, e.g. "French Tarot" and "Tarocchini" among others,

wherein the cards of the so called "Major Arcana" were used as trump cards of different ranks (until the 1700s they were just called trump cards). Any and all mysticism surrounding the cards seems to have originated in the English-speaking world during the 18th century, specifically the 1780s. This probably had to do with the publication of some very popular writings (pro and con) by Protestant clerics and Freemasons who had made extensive studies of the cards. A clergyman-Freemason scholar, Antoine de Gebelin, wrote about Tarot in 1781 in his book The Primitive World, a hugely influential study on supernatural belief. Eliphas Levi's 1850s textbooks on Ritual Magic first identified the cards as an esoteric key. The original games are mostly trick-taking games in the same vein as bridge and whist, and are still played in France, Italy, central Europe, and occasionally Canada. (Tarot decks used for divining, however, are seldom suitable for gaming purposes, being rather hard to read when fanned out in a hand rather than spread on the table.)

In pop culture, tarot decks are almost always exclusively built of Major Arcana, when they even bother with details like actually sticking to cards one can find in actual tarot decks. Viewers Are Morons, after all, and drawing Death is far more dramatic than stopping to explain what, exactly, the Ten of Swords actually means, which is far more symbolic of actual literal death than Death (who is more a symbol of abrupt end and sudden change, which doesn't have to be bad).

There's a variety of older decks with different forms, but the most anciently fixed Tarot is the Tarot de Marseille with the 4 suits and 22 major arcana. The Rider-Waite Tarot (1910) was the first to put pictures on the Minor Arcana and is also an influential model for all Anglo-Saxon Tarots. The most influential modern Tarot is probably Aleister Crowley's Thoth Tarot Deck (1943), which keeps the Waite format but tweaks the symbolism and changes several names; Justice (XI) becomes Adjustment (VIII), switching with Strength (VIII), which becomes Lust (XI), for example, while the familiar Waite court cards are replaced by Princes, Princesses, Knights, and Queens. note switching cards VIII and XI is fairly common, and not without precedent. Decks originally listed them as Justice and Strength respectively, but the highly influential Rider-Waite deck swapped them to better fit the astrological symbolism it was using.

As any magician worth their salt will make up a personalized tarot out of whatever symbols they prefer, there's a lot of other tarots recently made that do not fit to those patterns (from slight alteration to wild differences; this is an online example of one such

). The quote by Eliot above is an example of entirely made up Tarot cards mixed with actual ones. Diana Wynne Jones observed, in The Tough Guide To Fantasy Land, that High Fantasy Tarot decks have up to ten suits, plus wild cards and trumps, and appear to have only aces and court cards. This is not limited to High Fantasy.

The Tarot borrows a lot of symbolism from most of the Western hermeticism and mythology (decks prior to Rider-Waite were even typically based on Roman Catholic themes and symbolism), so expect crossover imagery.

For more details on the traditional meanings see Tarot Cards.