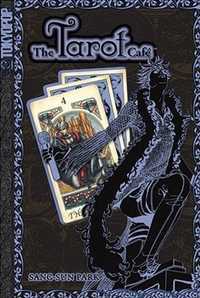 The Tarot Cafe is a beautifully illustrated manhwa by Sang-Sun Park about a fortune teller named Pamela who deals with special customers after midnight. These customers can range from a wish-giving cat to a vampire to an alchemist (and so on and so forth), all of them with problems that only Pamela can help with... for a price. The particular price Pamela asks from these peculiar customers of hers just so happens to be a bead from Berial's necklace. The reasons as to why she's gathering the beads is something she prefers to keep to herself, but these are revealed during the course of the story.

The manhwa starts out as a series of one-shot stories but eventually is revealed, through the mysterious beads Pamela collects, to be connected in a complicated plot that covers Pamela's life, from the time when she was a very small child to an adult, and is a mix of horror, comedy and drama. Despite the unreliable narrative (is it Ashes or Axis? Berial or Belial?), it's quite an enjoyable read, with humor lightening an otherwise dark story.

Tropes associated with The Tarot Cafe: