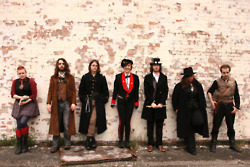 We were all once, every one of us — well, with the exception of the Toy Soldier, we were all once mortal and boring like your good selves. Until something within each of us broke. Shattered, beyond repair. And it was replaced by a fascinating individual by the name of Dr. Carmilla who, unfortunately, has since fallen out an airlock.
Advertisement:

The Mechanisms were a band operating largely out of Oxford and London, UK. Offering retrospective futurist storytelling in the form of musical cabaret, they are a concept band consisting of immortal space pirates originally created by Dr. Carmilla as her backup band/companions. In between roaming the galaxy having fun, violence, adventure, violence and violence, they tell the tales of the things they've seen over the course of their long, long lives.

The band is no longer active, having given their farewell performances in London on 18 and 19 January 2020 after around ten years of performing, but their albums remain available

and the individual members remain active in other projects.

The crew:note The roster changed slightly over the years as some members left or returned; the total number for most of their active years was between seven and nine.

Tropes featured by The Mechanisms as a whole:

Tropes featured in their story sets: