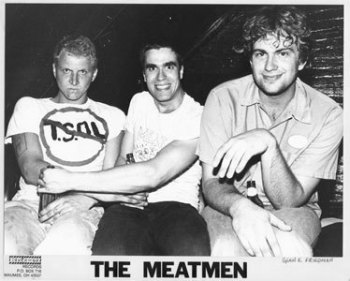 "We're the Meatmen - and you suck!"
Advertisement:

The Meatmen are a Hardcore Punk band from Lansing, Michigan. Formed in 1981 by former elementary school teacher/Touch and Go zine creator Robert Vermeulen (later dubbed Tesco Vee), the band quickly gained an infamous reputation in the underground scene for having a very controversial and puerile sense of humor in their lyrics (while not on the audience baiting level of F.E.A.R., they were definitely up there), however the band folded two years after its creation when Tesco relocated to Washington, D.C. - where he released the solo EP Dutch Hercules before reforming the Meatmen with members from Minor Threat and the Necros. This incarnation of the Meatmen, however, had a more metallic sound to them than the old Meatmen, and this quickly proved a good way to piss off and alienate a good chunk of the old fanbase. The band lasted until the mid-late 1990's, releasing three more metal/punk albums before splitting up.

Roughly ten years later, Tesco's son started inquiring about a reunion so he could see his dad in action, and one "reunion" show later, the Meatmen rose from the ashes for a third time, and as of 2014, the band has released two new albums and still tour to this day.

"We're the Meatmen, and tropes suck!"