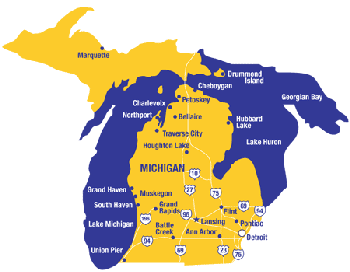 Michigan is a northern American state located in the Great Lakes Region of the United States (the eastern half of the Midwest). It is bordered to the south by the states of Indiana and Ohio, and by Wisconsin to the west. The state borders four of the five Great Lakes (Michigan, Superior, Huron, Erie) and for this reason is known as the Great Lake State. Michigan is the only state to lie entirely on a peninsula, or (as it happens) two: the sparsely-populated Upper Peninsula (UP) in the north and the more densely-populated Lower Peninsula (LP) in the south. The LP famously looks like a mitten; if you ask a Michigander where he/she is from, very often he/she will point to a spot on the back of the left or front of the right hand (the fingers are populated, but not as heavily), using the hand as a rough map of the state. Metropolitan Detroit occupies the area around the first knuckle of the thumb, while Flint is about halfway up the thumb webbing on the palmar side. Saginaw and associated cities are up the thumb. Lansing is smack in the middle of the palm, and Grand Rapids occupies approximately the fourth (ring) finger's first knuckle (if using the back of the left) or a bit below the base of it (if using the inside of the right). Traverse City, the Leelanau Peninsula and associated "cottage country" all are located along the pinky finger, while Mackinac Island is just off the tip of the first (index) and adjacent to the middle finger.

An oft-forgotten fact about Michigan is that it is huge—the largest state east of the Mississippi by total area thanks to all those lakes and the second-largest east of the Mississippi by land area (Georgia is a little bigger). Its land area is approximately the same as that of England and Wales combined, and its total area is slightly greater than the island of Great Britain (in other words, Michigan has an entire Scotland's worth of lake). The shape of the state—two peninsulas roughly perpendicular to each other—makes getting from the UP border with Wisconsin to Detroit quite a long trip. note The drive from Monroe (the south-easternmost major town in the LP) to Atlanta is actually shorter than the drive from Monroe to Ironwood (the north-westernmost major town in the UP)

In terms of its politics, the state has been pretty swingy for the last century, willing to give moderate Republicans and Democrats a shot in elections. It currently has a Democrat governor and Senators, a majority Republican state legislature,note Because of gerrymandering; the Democrats actually got slightly more votes in the 2018 State Senate election and 2020 State House election overall, but the district lines ensured a Republican majority. a 50/50 split in the House of Representatives, and voted for Joe Biden after previously helping to elect Donald Trump.

The state can be broadly divided into regions, as follows:

Other facts about Michigan: