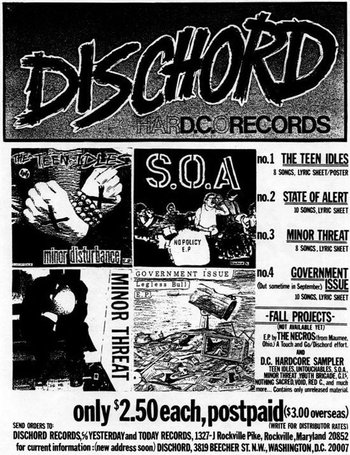 Hardcore Punk is what happens when you take Punk Rock and make it harder, faster and more aggressive. Simple.

But also more out-there, and somewhat political in some cases. It started in North America in the late 1970s. The musicians had (mostly) identical ideologies to the first punk rockers, including the DIY-aesthetic. However, while the major early punk bands signed to major labels, hardcore bands recorded DIY records and sold them on tour, retaining their underground freedom. The art school influences on early punk were discarded, as hardcore musicians and fans tended to have a more blue collar background. As well, hardcore bands and fans moved away from the multicoloured Mohawks and flamboyant look and towards simple crew cuts, plain t-shirts, jeans and sneakers.

New York Hardcore, or NYHC, began in the 1980s, with a heavier, more chugging sound and a more aggressive attitude. NYHC produced the sounds of bands like Sick of it All and Agnostic Front. Popular bands from the region today are Madball and H20. Bands like Madball were instrumental in the adoption of a "tough guy" sound and image in part of modern hardcore, seen in bands such as Hatebreed, while a band by the name of Judge took the slower approach of My War-era Black Flag and framed it in an NYHC context, creating beatdown hardcore. Other bands in New York, such as the Cro-Mags, adopted Krishna Consciousness.

In the early 1980s, the UK hardcore scene produced Discharge, a band with a brutal roar of guitars and screamed vocals on anti-war themes, all over an unrelenting drumbeat, nicknamed D-beat, which was influential in hardcore. Their fusion of hardcore punk with the New Wave of British Heavy Metal would be refined by bands like Amebix, Hellbastard, Antisect, and Anti Cimex, spawning the genre of crust punk.

Japanese hardcore got its start sometime around the early 1980s, with acts like S.O.B., SS, GISM, The Stalin, and Gauze forming the initial wave. Characterized by its prominent noise and Discharge/D-beat influences, Japanese hardcore was notoriously frantic and abrasive and proved instrumental in the rise of thrashcore and grindcore, with GISM and S.O.B. having been noted as influences by Napalm Death. It also helped influence metalcore, as many early acts (particularly Integrity and Ringworm) cited Japanese hardcore and particularly GISM as an enormous influence on their music.

Straight Edge is thought to have been begun by Ian Mackaye of Minor Threat. This was a way of life in which the participant would abstain from the vices of the earlier hardcore scene - usually smoking, drinking, drugs and sometimes promiscuous sex. While this movement was for a time characterized by a moral panic over gang violence, its current day incarnation could be seen to be the "Positive Hardcore" scene of New England, which includes bands such as Have Heart, The Effort and Bane.

In the late 1980's and the early 1990's, a new breed of hardcore band began. The first of these is sometimes thought to be Integrity, who hailed from Cleveland. They mixed thrash metal influences with the fresh flavor of hardcore, and sowed the seeds of a new genre, nowadays known as Metalcore. Other bands who were instrumental in this were Ringworm, Rorschach, Overcast, and Earth Crisis. Converge were a band who formed in Boston, Massachusetts. They took the early sound of metallic hardcore and created an enigmatic mix of extreme metal with envelope-pushing sensibilities. Nowadays, they are seen to be the keystone in the influences of the Mathcore subgenre, which includes bands like The Dillinger Escape Plan and Architects.

In the early 1990s, hardcore also branched out through the work of bands like Fugazi, Rites of Spring and Embrace. This was the beginning of Post-Hardcore and Emo Music, which have both strayed from their origins and become difficult to define. On the other hand, this time period also resulted in a different movement that aimed to mix the energy and intensity of hardcore and grindcore with the oblique, discordant elements of post-hardcore, noise, and math rock to create the powerviolence genre, which made a name for itself with bands like Man Is the Bastard, Spazz, and Despise You and later helped create the Entombedcore movement in the late 2000s when people began to mix it with metalcore and crust punk. Furthermore, beatdown hardcore and slam death metal also started finding themselves being mixed in ways that increasingly blurred the lines between the two genres in the 2010s; while it is still largely an underground movement, acts like No Zodiac, Dysentery, The Merciless Concept, and Acranius have started to gain some momentum, and Slam Worldwide (a content aggregator/one-man PR firm) has served as something of an epicenter of this movement. The Entombedcore movement also bled into death metal, where a new crop of old-school death metal acts with extremely prominent hardcore elements (namely Gatecreeper, Outer Heaven, and Creeping Death) began to find substantial unexpected success in the late 2010s.

Bands from Southern California in the early 1990s who were influenced by the hardcore sound of Black Flag and the Descendents, such as NOFX, Rancid, Bad Religion and The Offspring, were a huge part of the 1990s Punk Revival, incorporating more melodic elements, with Bad Religion in particular being known as one of the creators of the melodic hardcore genre. These bands also cemented the genre of Skate Punk and played a part in the popularity of Ska Punk and Pop Punk, influencing bands in the latter genre like Green Day and blink-182.

Needless to say, the work of pioneers like Black Flag and Minor Threat have had an extensive influence on the music of today, whether they wanted to or not.

Some bands commonly referred to as hardcore: Tropes associated with hardcore and its direct offshoots: