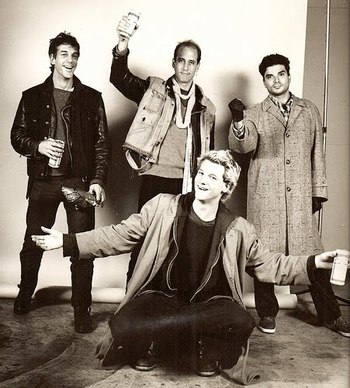 "Um...okay, like...s-see there's this...and...well and then uh...never mind, forget it; you wouldn't understand anyway..."
—"Brainwash"
"I too have sung death’s praises
But I’m not going to sing that song anymore
Cause I’ve found out what living is all about
And it’s life! Life! Life is the only thing worth living for."
—"Life"
Advertisement:

Flipper is a rather infamous Noise Rock band hailing from San Francisco, California.

In 1979, former members of Negative Trend and The Sleepers gathered together to form a new band, which was named after original vocalist Ricky Williams' pets (no that's not a mistake - his cat, parakeet, and fish were all named Flipper due to the ease of remembering one name when he was high as a kite) after nobody could think of a better name. Despite being a founding member and the lead singer, Ricky was booted before the band had made a single recording, allegedly because he was "too weird". As a result, Bruce Lose and Will Shatter traded vocal and bass duties, Ted Falconi (a Vietnam War veteran) played guitar, and Steve DePace played drums. The band had a few recordings on a compilation album and the "Love Canal"/"Ha Ha Ha" 7" single out in their early career, however the band gained notoriety through their 1981 single, "Sex Bomb" - a deliberately minimalistic Epic Rocking song which became a crowd favorite... of sorts. A year later, the band released their debut album, Album - Generic Flipper. The band continued to make waves in the San Francisco punk scene, most notably due to the fact that while most punk bands were speeding up their sound, Flipper deliberately played a slow, raucous wall of noise that infuriated many potential audiences, and at the exact same time, wound up drawing in many others (Jello Biafra and Henry Rollins were fans; Buzz Osbourne, Krist Novoselic and Kurt Cobain all listed Flipper as major influences to their music; Krist would go on to become Flipper's bassist for several years during the late 2000s, recording a studio album and a live album with them during that time), pioneering a style of music which would eventually give way to sludge metal, grunge, and noise rock.

1984 saw the band's second major release and a live album recorded at a CBGB's performance - Gone Fishin' and Blow'n Chunks, respectively. The band powered on through the 1980's and released a double Live Album called Public Flipper Ltd. Tragically, the band folded after key member Will Shatter died of a drug overdose on December 9th, 1987. They reunited in 1990 to release yet another live album and a new studio album (Nürnberg Fish Trials and American Grafishy, respectively), neither of which were well received among fans. The band broke up yet again after replacement bassist John Dougherty died of a drug overdose (eerily enough, founding member Ricky Williams died of a heroin overdose that year as well). As of 2002, the band has reunited for a third time, performing every now and then with Bruce Loose (he changed his name with the third incarnation because "Lose" implied bad luck) and Rachel Thoele filling in as bassist, with no narcotics related fatalities so far.

In 2015, it was announced that Bruce Loose had retired from Flipper due to his history of back injuries catching up to him, leaving him unable to tour. It was also announced that David Yow, vocalist for The Jesus Lizard, had stepped in to take over Loose's singing duties, and that long-time "fifth Flipper" Bruno DeSmartass had rejoined the band as bassist.