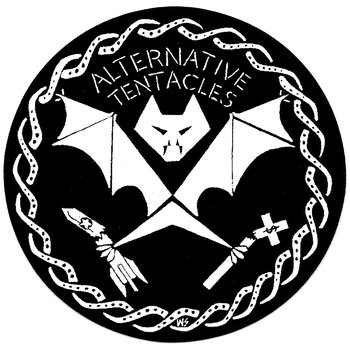 The AT "bat" logo, designed by Winston Smith.
"Tormenting the stupid since 1979"
—One of the label's slogans
Advertisement:

, a company created by Jello Biafra and East Bay Ray of Dead Kennedys (although Biafra has long since taken over sole ownership), is one of America's oldest surviving independent labels; it's been in business since the late 1970s and has issued over 500 records. Although most often associated with Punk Rock, it releases various genres of underground music, as well as a lot of spoken word.

Originally, AT was created as an outlet for the DK's own music; its first release was the original version of "California Über Alles". However, it soon began signing like-minded punk and Hardcore bands such as Butthole Surfers, D.O.A., and TSOL; it also released the compilations Let Them Eat Jellybeans and (in cooperation with Maximum Rock & Roll magazine) Not So Quiet On the Western Front, which helped obscure punk and Hardcore bands get a wider audience. Alternative Tentacles also opened a British branch to release underground US bands like Bad Brains, Black Flag, Flipper, Hüsker Dü and MDC in Europe; AT-UK also licensed the Eraserhead soundtrack.

Alternative Tentacles has suffered some devastating blows over the years. In 1985, Jello Biafra was sued for "distributing harmful matter to minors" — namely, the H. R. Giger piece "Penis Landscape", originally included as a poster with the Dead Kennedys' album Frankenchrist. Biafra was not convicted, although it was a Pyrrhic Victory since the legal battle nearly bankrupted the label and contributed to the band's breakup. In 2003, Biafra's former bandmates, who sued him over claims of unpaid royalties (which Biafra has always denied), were awarded the rights to the Dead Kennedys catalog. Despite these tribulations, AT survived and has continued releasing records ever since.

Besides Biafra's output, the label's music roster has included artists such as Alice Donut, The Dicks, Half Japanese, Leftöver Crack, Neurosis, Nomeansno, Pansy Division, Tribe 8, Wesley Willis, and solo releases by Dot Wiggin of The Shaggs and Michael Gira and Jarboe of Swans, among others. Alternative Tentacles has also partnered with leftist/anarchist book publisher AK Press to release spoken word talks by political commentators such as Mubia Abu-Jamal, Judi Bari, Noam Chomsky, Ward Churchill, Jim Hightower, Christian Parenti, Greg Palast, Howard Zinn, and Biafra himself. AT has also done some DVD releases of Biafra-related films, including Terminal City Ricochet, The Widower, and the Documentary 924 Gilman St.: Lets Talk About Tact and Timing....

Alternative Tentacles performers, past and present, with TV Tropes pages: