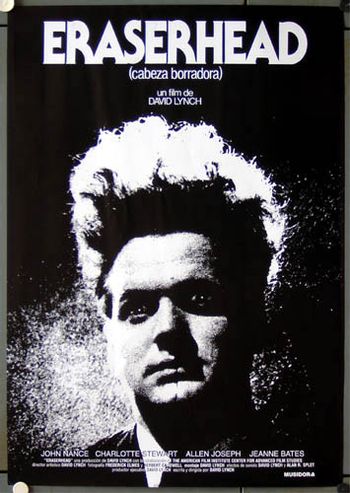 Eraserhead is a 1977 Surreal Horror film by David Lynch, notable for being Lynch's feature-length film debutnote as a director, writer, producer, editor and music co-producer, and in his own words (and

very few at that), his "most spiritual film".

Henry Spencer was on vacation. Mary X, his old girlfriend, had a deformed baby. "They're still not sure if it is a baby." She gave it to him and left. He had difficulty raising it.

There was a lady speaking from his radiator.

There was a Beautiful Girl Across the Hall.

There was a man in a pencil factory.

There was a planet.

Henry's baby got sick. He tried to help it.

The film is slow-paced, almost completely void of dialogue (there isn’t any until 10 minutes in), and can safely be called the most popular student art film ever made. It was also the product of a considerable Troubled Production despite being produced with the assistance of the school Lynch was attending at the time (the American Film Institute); at one point, the production was kept afloat exclusively by donations from actor Jack Fisk and his wife Sissy Spacek.

The film initially opened to small audiences but gained a cult following after several runs as a midnight movie. Among its frequently acclaimed elements are its atmospheric industrial sound design, which required a year of work, and its hauntingly realistic effects (which Lynch has kept a secret to this day, to the point of blindfolding the film's projectionist to avoid revealing its nature).

Not to be confused with the Filipino rock band The Eraserheads, or the codename of Pro Hero Shota Aizawa.

"A dream of dark and troubling tropes":