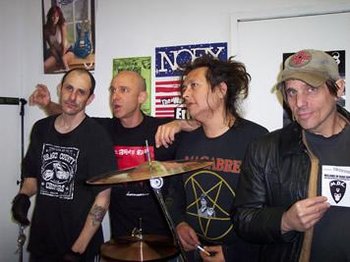 MDC (Millions of Dead Cops...among others) is a Hardcore Punk band from Austin, Texas, and was one of the best known bands from the scene, alongside The Dicks and Big Boys, who frequently played with each other. Formed in the late 1970's as The Stains, the band released one single (a slower version of "John Wayne Was a Nazi" and "Born to Die") before changing their name to Millions of Dead Cops in 1981 and moving to San Francisco. The band joined forces with Jello Biafra, who helped distribute their debut album, Millions of Dead Cops on his Alternative Tentacles label. The band quickly became a classic in the underground punk scene, touring relentlessly throughout the 1980's. Later albums would depart from their breakneck paced hardcore, dabbling in classic rock, cowpunk, and progressive rock, however the band definitely retained a punk sound.

The band split up in 1995, however singer Dave Dictor reunited the band in 2000, relocated MDC to Portland, Oregon, where they still remain and tour from today.