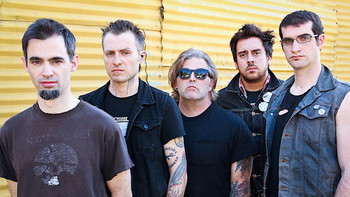 "From all the way in the back of the food stamp line, and straight outta motherfuckin' rehab, it's the good, the bad, and the Leftover Crack!" —"Clear Channel (Fuck Off)"

"Man, you know there ain't no such thing as leftover crack!"

Hailing from New York City (specifically, Alphabet City's C-Squat), Leftover Crack formed from the ashes of Choking Victim - who recorded one album before breaking up the same day - in 1998, originally consisting solely of Stza note  pronounced "Stizz-uh" Crack (real name Scott Sturgeon) until about 2000 or so, when he added on Choking Victim's ex-bassist Alec Baillie, as well as Brad Logan (guitar), Mike Trujillo (guitar), and Amery Smith (drums). In that two year period, Stza had recorded several songs left over from the Choking Victim days, which the band proceeded to re-record and release as the "Rock the 40oz" EP in 2000. After the band contributed "Crack City Rockers" to a Hellcat Records compilation album, the band was signed to the label to produce three albums for them. The band began recording a series of songs for their first full-length, which was tentatively titled Shoot the Kids at School. The label found the idea of naming an album with the title to be abhorrent, since the Columbine shootings were still fresh in the average American's mind, and refused to release the album. The band then proposed to the label that they'd agree to release the album under a different title, but only if they could drop out of the contract. The label complied, and their first full length album, Mediocre Generica (a jab at the label for wanting a "mediocre, generic" album title and cover) was released on September 11, 2001.

After the release of Mediocre Generica, the band found themselves in a two year position where they couldn't leave their current label, sign to another label, or release any new material under the name Leftover Crack. The band did, however, manage to bend the rules of their contract and released a split EP with F-Minus as "The Crack Rock Steady 7" working under aliases with additional musicians. The "Baby Jesus Sliced Up In The Manger" EP that spawned from these sessions was released on November 27, 2003. In February of the same year, the band began working with record engineer Steve Albini on a follow-up to Mediocre Generica, now that they were officially off of Hellcat Records' roster. The band released a demo for what would eventually become 2004's Fuck World Trade in the winter, and were quickly scooped up by Jello Biafra's label Alternative Tentacles, where the album (and the band) quickly found a home. Fuck World Trade was released on August 30th to overwhelmingly negative response from mainstream media, due to its explicit lyrics/title and the album's cover, which depicts George W. Bush, Dick Cheney, and Rudy Giuliani (Tony Blair on the U.K. release) directly causing the 9/11 attacks in New York City. As a result, chain stores like Walmart and Best Buy refused to carry it. The fanbase, however, enjoyed the album and praised the changes from the previous release, including longer songs, experimentation with alternative instruments, and adding guest singers to the mix.

At the end of 2004, drummer Brandon Possible died, which sent the band into a brief state of hiatus. Stza spent the hiatus touring as an acoustic solo artist performing Choking Victim and Leftover Crack songs, and guitarist Erza spent his time writing songs for his band Morning Glory. The rest of the band's activity at the time is unknown, however, they resumed touring in 2005, and released their first song since Brandon's death in 2006 as a part of a 7" split single with Citizen Fish on Fat Mike's Fat Wreck Chords label. The label later released a full-length split with Citizen Fish, which would also include songs from Stza's alternative band, Star Fucking Hipsters, which Stza would focus on for several years following the Citizen Fish split (Erza would also focus on Morning Glory during this time, which effectively forced Leftover Crack to the back burner). In 2009, however, Erza left the band on seemingly amicable terms until Stza accused him of being a liar and a drug addict, which sparked an online feud that lasted until Leftover Crack's December 2010 tour featuring Erza on guitar. The band continued to tour for several years following the feud with no major news coming from the Leftover Crack camp until mid-2015, when Stza announced that the band had finished their third album, Constructs of the State, which was released on November 27th, 2015 via Fat Wreck Chords.

The band tends to write lyrics of a radical leftist nature, denouncing religion, capitalism, and authority (especially police), and promoting unity against racism/sexism/homophobia, anarchism, and awareness of politics in the world around the listener. Not surprisingly, the members have had a colorful history with law enforcement, including arrests (Stza in particular having a reputation for being a shoplifter, even writing about his experiences with Choking Victim) and harassment. According to Stza, the name is "an oxymoron", such named since crack cocaine addicts are so vigorous in their habit that they are extremely unlikely to have any "leftover" crack.