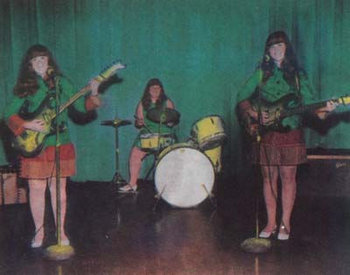 Achievements in Ignorance personified.
"The Shaggs are a sort of cult like band. Cult as in their music that was once lost became found and with a little help from The Dr. Demento Show, Frank Zappa, and some guy named Kurt Cobain, they were rediscovered and have somehow stepped past the threshold of mediocrity (awfulness really…) and evolved into a band that escapes the boundaries of obscurity and being locked behind a circus sideshow-like persona. The kind of stuff your buddy in college might tell you about.

You might want a different buddy…"
—punknews.org, on eatdogs' 1-star review of Philosphy of the World
Advertisement:

The mother of a young Austin Wiggin, Jr. had three visions: he would marry a strawberry blonde woman, he would have two sons after she passed away, and his daughters would one day form a pop group. The first two came true. A determined Austin set out to make that third vision a reality.

Austin had four daughters: Helen, Dorothy, Betty, and Rachel. He withdrew them from school, bought them instruments, set them up with music and voice lessons, and had them practice their instruments for a good five years straight. Satisfied with their progress, Austin booked them to play on Saturday nights at the town hall in their hometown of Fremont, New Hampshire — except they weren't very good at all, and their ineptitude only resulted in other kids picking on them. Undeterred, Austin booked a single day at the Fleetwood Recordings studio, where it became abundantly clear to the befuddled engineer that the girls weren't ready to record. Austin reportedly replied, "I want to get them while they're hot." The end result, such as it is, was named Philosophy of the World.

The Shaggs had an unusual approach to making pop music. Not only did their instruments sound blatantly out of tune, but their limited ability caused each member's individual performance to seemingly follow its own time signature. Each individual note matched up to every syllable they sang, and in general, it all added up to what the average person would hear as a lot of disorganized sound. Despite all this, the band has developed a small cult following and even some good reviews over the years (amongst them being from no less than Lester Bangs, Kurt Cobain and Frank Zappa), with many praising the honesty and humanism of their lyrical content. Nowadays they are seen as a prime example of Outsider Music - music created by non-musicians that is unprofessional, unconventional and experimental.

The man Austin hired to press 1000 copies of Philosophy of the World reportedly took 900 copies along with the money and ran, hence why original pressings are obscenely expensive. Despite this setback, the Shaggs pressed on — their musicianship did eventually improve over time, and the band developed a small local following playing dances around New Hampshire. The band had a second recording session in 1975, where among other songs, they did a cover of "Yesterday Once More" by the Carpenters. The sessions never materialized into a full album, as the sessions — and the band itself — were aborted after Austin Wiggin passed away from a heart attack.

The band's rediscovery began while they were still together, when Frank Zappa stopped by the Dr. Demento show in the early 1970s and played a few cuts from Philosophy of the World on air. In 1980, the band NRBQ arranged for Philosophy to be reissued on Rounder Records, and it proved to be a huge underground hit. A second album of Shaggs material, Shaggs' Own Thing, was issued in 1982 and featured some of their more competent recordings from their later career. In 1999, Philosophy was reissued again, this time by major label RCA Records, and the Shaggs and their cult following received national media attention as a result.

Helen, the drummer, took her own life in 2006. An off-Broadway musical about their life was created and ran in in New York City in the early 2010s. Dot Wiggin released a solo album on Jello Biafra's Alternative Tentacles label in 2013. In 2015, she was the opening act for Neutral Milk Hotel's reunion tour; her band played both her new, straightforward material and songs from Philosophy of the World, played exactly as they were on the album (which is no mean feat, because doing that on purpose is extraordinarily complicated). In 2017, the surviving members of the Shaggs — Dot, Betty, and Rachel — reunited

In October of 2018, it was announced that there would be a movie based off the Shaggs' story

, starring Elsie Fisher of Eighth Grade fame. Against all odds (and we mean all odds), a half-century after Philosophy of the World was released, the Shaggs' legacy lives on.

Tropes featured in their careers & music include:

Alternative Title(s): Philosophy Of The World