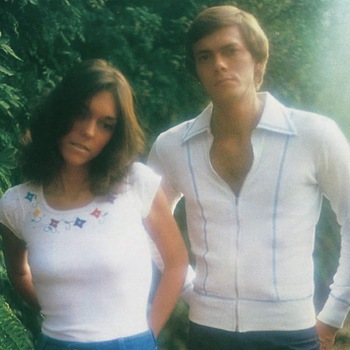 "Every sha-la-la-la, every whoa-whoa, still shines..."
— "Yesterday Once More"
Advertisement:

Carpenters (absolutely not "The Carpenters") were a brother and sister pop duo consisting of Richard (born October 15, 1946) and Karen (March 2, 1950 – February 4, 1983) Carpenter. Karen started out as the act's drummer, but was gradually phased off the instrument and moved to the front once it became clear she had a superlative singing voice; Richard wrote and arranged the material, played piano, and provided backing vocals.

They were active from 1969 until Karen's death in 1983. During this time, they were very prolific and scored numerous hits, only a few of which are now commonly known to people who weren't there in The '70s. Their biggest hit, and probably their best-remembered song, is "(They Long to Be) Close to You"; others include "We've Only Just Begun", "For All We Know", "Rainy Days and Mondays", "Superstar", "Hurting Each Other", "Sing", "Yesterday Once More", "Top of the World", and "Only Yesterday".

Nowadays, the duo are as well known for their behind-the-scenes tragedy, specifically Karen's, as they are for their music. Karen developed anorexia nervosa in her mid-twenties after years on a restrictive diet, and as a result her health rapidly deteriorated, culminating in her death from heart failure at the age of 32. Anorexia was a little-known condition at the time, with Karen's death being the primary catalyst in it becoming more widely publicized; as a result, she tends to be viewed as the public's unofficial patient zero for anorexia, though the disorder was already known and documented in the medical community.

May or may not be related to Sabrina Carpenter of Girl Meets World and her older sister Sarah, despite the fact that both sets of Carpenters have the same roles in music. (Karen and Sabrina sing while Richard and Sarah do the behind-the-scenes work; in Sarah's case, she plays on instruments when Sabrina performs live.)