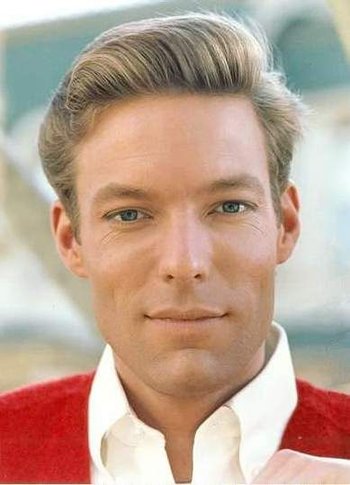 George Richard Chamberlain (born March 31, 1934 in Beverly Hills, California) is an American actor and singer best known for his breakout role as TV's Dr. Kildare (1961–66), and for his portrayal of a romantic leading man in numerous films and high-profile TV miniseries such as The Thorn Birds, Shogun, Centennial, Wallenberg: A Hero's Story, and the first filmed adaptation of The Bourne Identity.

His success in various television projects gave him the affectionate title of "King of the Miniseries." TV Guide ranked him #18 on their list of the "Greatest TV Stars of All Time."

He had a brief but moderately successful recording career in the 1960s, with his first single, "Theme from Dr. Kildare (Three Stars Will Shine Tonight)", reaching #10 on the Billboard Hot 100 chart. He was also the first singer to record "(They Long to be) Close to You", years before it became a huge Carpenters hit.

In 2003, he came out publicly as gay in his New York Times bestselling autobiography Shattered Love, and has received acclaim for his depictions of LGBT characters in Brothers & Sisters and Desperate Housewives.