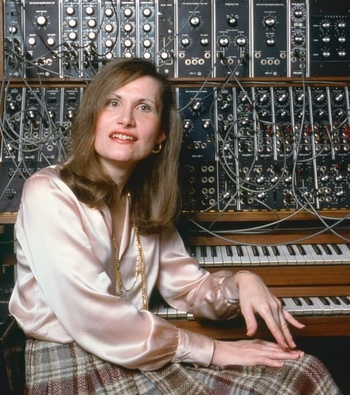 She is one of the pioneers in adapting Classical Music to Electronic Music, and is notable for being one of the first transgender public figures to be open about their gender reassignment surgery; for a while after her transition, Carlos' works were still being published under her birth name, with Carlos not publicly coming out until 1979 thanks to her personal concerns surrounding how her identity would be received. After coming out, however, these and previous works have since been republished under her current name (as for the public response, she described it as "surprisingly indifferent").

Carlos first gained notoriety with the landmark album Switched-On Bach (1968), which interpreted music by Johann Sebastian Bach in a futuristic way, played entirely on a Moog synthesizer. This was a controversial move, especially because of Bach's divine status among music lovers and the fact that nobody ever tried to play these 200 year-old works in such a modern fashion. In spite of this, the album sold well, won three Grammys, and introduced many young people to the genre, those who normally would never listen to classical music.

In 1971, Carlos was approached by Stanley Kubrick to score A Clockwork Orange; she gave Ludwig van Beethoven's 9th Symphony, "Funeral Music for Queen Mary" by Henry Purcell and the final of Gioachino Rossini's "William Tell" Overture a similar approach. The distinctive and recognizable musical style led to that score becoming a Cult Soundtrack, and has been imitated and covered by countless other electronic musicians since. Kubrick hired Carlos again to electronicize Hector Berlioz's "Dies irae" for The Shining. Another famous movie she was involved with was the Cult Classic TRON, for which she composed an original score.