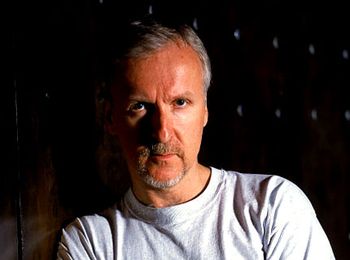 James Francis Cameron CC (born August 16, 1954) is a Canadian director, producer and screenwriter famous for the Terminator franchise, Aliens and the blockbusters Titanic (1997) and Avatar, eh? He also has a reputation for being a tyrant on the set of his films, earning him the nickname "Iron Jim", but one certainly can't argue with the results considering how spectacular and well made they often turn out to be. He's also known for being much kinder when not filming.

His first exposure to filmmaking came while he attended the California State University in Fullerton, from where he'd frequently visit the film archive of UCLA. After dropping out he took a variety of jobs and wrote in his spare time while learning about filmmaking from reading books and theses at the USC library. Inspired by a viewing of Star Wars in 1977, he decided to enter the film industry. He began as a miniature model maker with Roger Corman's studio, and later ended up as special effects director on John Carpenter's Escape from New York. He was hired to do special effects for Piranha Part Two: The Spawning in 1981, but ended up in the director's seat after the first director abandoned the project. After arriving at the studio, he discovered that the movie was under-financed and that a majority of the crew were Italians who couldn't speak English.

During the predictably torturous filming of Piranha Part Two, Cameron had a nightmare about a chrome-plated torso crawling out of a fire. Based on this, he wrote the script for The Terminator, lifting story material from Harlan Ellison's The Outer Limits (1963) stories "Demon with a Glass Hand" and "Soldier." When no production company wanted to let him direct, Cameron and his then-wife Gale Anne Hurd (a producer who also got her start with Corman) persuaded Orion Pictures to distribute the film, with financial backing by Hemdale Film Corporation. A relatively low-budget film at $6.5 million, The Terminator became a success, grossing a total of $78 million worldwide while gathering positive reviews and providing a Breakthrough Hit for the creator and a breakout role for Arnold Schwarzenegger as the titular murderous cyborg. Meanwhile, Ellison noticed the plagiarism and successfully sued for some money and an acknowledgment in the film's credits. Meanwhile Cameron was involved in writing a draft for Rambo: First Blood Part II, which was heavily modified for the film.

Cameron next worked on a sequel to Ridley Scott's Alien, a film he was a big fan of. While filming in England, he repeatedly clashed with the crew, who considered him a poor substitute for Scott, especially over their practice of taking regular breaks that slowed down production and their taunting of his wife's role as producer. This caused initial cinematographer Dick Bush to be fired after about a month over Creative Differences, to be replaced by Adrian Biddle. The dispute culminated in a walkout after Cameron fired a cameraman due to a clash over lighting the xenomorph nest note said cameraman thought it would be a brilliant idea to have the nest really bright and visible and ruin the suspense; Cameron's wife managed to persuade the crew to return to work. These repeated disruptions forced the crew to work at a breakneck pace to finish the film before its release date, and composer James Horner was forced to write the score without seeing the completed film and record it in an outdated studio in about four days. Due to the lack of time, Horner was forced to reuse some motifs from previous scores, and Cameron had to hack it in editing to match the film without any input because Horner was busy elsewhere.

In spite of the troubled production and Executive Meddling which resulted in the removal of some footage for the theatrical edition * expository scenes of Hadley's Hope and Ripley's backstory were thrown out, the Action Film Quiet Drama Scenes with Ripley and Newt were shortened; Sigourney Weaver wasn't happy about this, but luckily all those scenes were restored for the Director's Cut, Aliens went on to become another huge success, receiving universal critical acclaim (being constantly referred to as an Even Better Sequel), a cover and article dedicated to it in Time Magazine and a total profit of $131 million worldwide. Aliens also holds the distinction of being the first science fiction movie to gather seven Academy Award nominations, including Best Actress for Sigourney Weaver, and even picking up Oscars for Best Visual Effects and Sound Effects Editing, in a period when science fiction movies were largely ignored and not taken seriously by the Academy.

His next project was The Abyss, the story of an oil-rig crew that discovers otherwordly creatures. It was considered to be one of the most expensive films of its time, and required cutting-edge effects technology and filming at depths of up to 12 m. Despite the production running overbudget, it recouped its investment. This time, critical reaction was lukewarm compared to his previous highly acclaimed films. This was largely attributed to more Executive Meddling and the removal of various scenes that made the film's plot difficult to follow, but Cameron has since revealed that he cut those scenes himself over the objections of the 20th Century Fox chiefs because he felt the special effects weren't up to par. Cameron subsequently re-inserted the deleted scenes in the 1993 special edition release of the movie after he felt that technology progressed sufficiently for them to be properly realised, a move that made the film more coherent and has generally improved audiences' and critics' opinion of the film in retrospect.

After The Abyss, a long dispute over the rights to The Terminator was solved when they were bought by Carolco. Production began on a sequel, called Terminator 2: Judgment Day. The sequel was even more expensive than The Abyss, with a budget of $100 million and innovative use of CGI and special effects to create the liquid metal T-1000 model. It was universally acclaimed and broke box office records, earning a total of $519 million worldwide and four Academy Awards (Best Visual Effects and Sound Effects Editing again, plus Best Makeup and Sound).

After Terminator 2, Cameron started pursuing projects in different genres compared to the science fiction/action films he did previously. His first such project was True Lies, a remake of the French comedy La Totale which had been suggested by Schwarzenegger. Much like The Abyss, the film was a blockbuster success but once again drew a lukewarm critical reaction. During this time he also came up with the story and co-wrote the script for a then near future Cyberpunk thriller called Strange Days, which his ex-wife Kathryn Bigelow directed. This film was very well received critically (Roger Ebert even gave it four out of four stars), but was a box office bomb.

The director's next major project was a movie based on the sinking of the Titanic, a subject he had been interested in for a long time. Thanks to his obsessive attention to detail, the production ran massively overbudget and overschedule. Eventually released in December 1997, Titanic became the film with the largest box office gross in history, and the first film ever to bring in more than $1 billion in ticket gross. The movie also won Cameron his first Academy Award for Best Director and Best Picture, along with multiple other Oscars. However, this movie is the polarizing entry in Cameron's body of work, polarizing fans severely, which gets worse if one is a fan of the Terminator films and Aliens. The result is a real Broken Base, largely between the Old Guard Versus New Blood of fandom - fans of his previous sci-fi action movies on the one hand, and the younger, more female audience he attracted that wasn't familiar with his previous works on the other. The film became practically a punchline for its melodramatic, sentimentalism and excessive focus on the romantic aspect of the story, only useful as a target for parodies and jokes, but was resurrected when it was reissued in 3-D for the actual ship's centennial in 2012.

Cameron did not make a movie for twelve years after Titanic. Instead, he created the TV series Dark Angel, filmed various undersea documentaries and produced the 2002 adaptation of Solaris. He returned to film in 2009 with the science fiction epic Avatar, which has surpassed Titanic by becoming the first film to earn over $2 billion at the box office. Despite some controversy over the film's political stance, not to mention a plot that is fairly easy to predict (and a Broken Base over whether that is a good thing or not), he is currently working on sequels for Avatar, in addition to messing around with, of all things, asteroid mining. He broke the record for traveling down to the lowest altitude on Earth.

Cameron's films have certain common traits, such as: a Production Posse consisting of Arnold Schwarzenegger, Sigourney Weaver, Bill Paxton, Michael Biehn, Linda Hamilton, Lance Henriksen, Jenette Goldstein and Stan Winston note A lifelong friend, he was the genius puppeteer and makeup master who helped bring James' Terminators and Alien Queen to life.; the threat of nuclear war; the interaction between humanity and technology; shiny glowy aliens; strong female characters; and titles starting with either A or T. He is also infamous for his temper and dictatorial filming style (the crew on some of his movies wore t-shirts reading "You can't scare me, I work for Jim Cameron"), along with his tendency to go way over-budget and over-schedule during production though, by all accounts, he's mellowed a bit with age.

As of Avatar, he became the first director in history to have two of his films each make a billion dollars; since then, he has been joined in this exclusive club by Christopher Nolan (The Dark Knight and The Dark Knight Rises), Peter Jackson (The Lord of the Rings: The Return of the King and The Hobbit: An Unexpected Journey), Michael Bay (Transformers: Dark of the Moon and Transformers: Age of Extinction), Joss Whedon (The Avengers and Avengers: Age of Ultron), James Wan (Furious 7 and Aquaman), and The Russo Brothers (Captain America: Civil War and Avengers: Infinity War). Including Titanic's Updated Re-release, he is also responsible for the first two films to each make $2 billion (with the Russos following suit with the release of Avengers: Endgame). Cameron is, along with James Wan, the only director to achieve this feat with two unrelated films and the only director to achieve the feat with original films as well as the only director to have any original films at all cross a billion at the box office.

Fun Fact: Cameron is also indirectly tied to the Predator franchise. When the production crew's first attempt to create the creature effect failed spectacularly, they asked Stan Winston to design the alien. The two were flying to Japan, and Cameron looked over Winston's shoulder as he was doing some preliminary design sketches and said, "You know, Stan, I've always wanted to see something with mandibles." Winston then incorporated the mandibles into the Predator.

Tropes About Him or that He Often Uses:

"James Cameron! Explorer of the sea! With a dying thirst to be the first! Could it be? Yeah, that's him! James Cameron!"