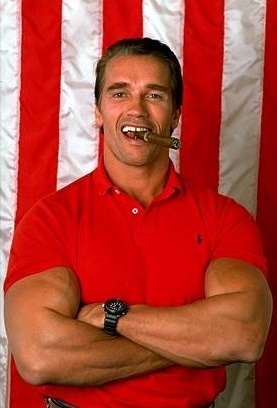 "Everything I have — my career, my success, my family — I owe to America."
"Arnold Schwarzenegger is the Governor of California. There's a perfectly ordinary English sentence."
— Dylan Moran

Arnold Alois Schwarzenegger (born July 30, 1947 in Thal, Styria, Austria) is an Austrian-born American bodybuilder turned businessmannote He holds a bachelor's degree in business administration and marketing from the University of Wisconsin

, and first became a millionaire

using the relatively paltry money he earned as a bodybuilder. turned actor (he became a naturalized U.S. citizen in 1983) turned politician, and former Governator of the world's 7th largest economy (from 2003 to 2011) whose journey started with his ability to lift really heavy things. He has also starred in dozens of blockbuster motion pictures.

Schwarzenegger first became famous as a professional bodybuilder, and is still considered the most successful bodybuilder of all time in terms of his pop culture impact and legacy in the sport. After coming in second in his first Mr. Olympia contest, he went on to win first place in six consecutive years. He came to mainstream attention through the documentary Pumping Iron about his 1975 clash with rival muscleman Lou Ferrigno. Parlaying his fame and physique into minor acting roles, he eventually landed his first major role in 1982 with Conan the Barbarian. Incidentally, while filming Conan, he came out of a five-year retirement to pick up one final first-place finish at Mr. Olympia.

Schwarzenegger followed up with a string of successful action films. In spite of his odd name, lack of acting training and thick Austrian accent no matter what the role, "Ahnold" quickly became one of the biggest names in Hollywood, commanding record-breaking salaries for movies with budgets almost as high as their body counts. While his line deliveries weren't always the sharpest, Schwarzenegger had natural charisma and knew how to poke fun at himself. His works are rife with thickly-accented one-liners that became as iconic as the man himself. Anyone who was alive in the late 20th century can do a pretty decent Ahnold impression.

But time gradually took its toll on Schwarzenegger's musculature and popularity. The '90s saw the gradual waning of his relevance, and by 2000, his career was noticeably in its autumn. Schwarzenegger decided to jump ship on acting while the jumping was good and make a third major career transition: this time into politics.

In spite of his Hollywood lifestyle, fondness for JFK, and marriage into the Kennedy family, Schwarzenegger is an avowed Republican (albeit a very progressive one) and very opinionated about politics. He was drawn to the party after listening to a Richard Nixon speech in Austria. Sensing opportunity during a special 2003 recall election for the governorship of California, Schwarzenegger entered the race on the Republican ticket and actually won. California now had a slogan-spewing, action star "Governator" in charge. Governor Ahnold's administration was California-style Republican, combining liberal social policies with fiscal conservativism. He won his reelection by a solid margin in 2006 and continued to serve until 2011. Overall consensus was fairly ambivalent, for better and for worse — his tenure was relatively uneventful and he maintained a fairly serious and respectable demeanor — which, admittedly, is a better track record than some career politicians manage.

After exiting office, Schwarzenegger declined to run for Senator and instead got back into acting, appearing in roles that acknowledged his advancing age since his heyday. He has not stopped his progressive activism, however, and continues to reach out to the public through social media, including Instagram, Twitter and Snapchat, which he typically uses to show people various bodybuilding expos, adventures around the world and the odd political rally.

Since June 2019, Chris Pratt is his son-in-law, being married to his daughter Katherine.

Trope Namer of The Ahnold.

This article is TERMINATED.