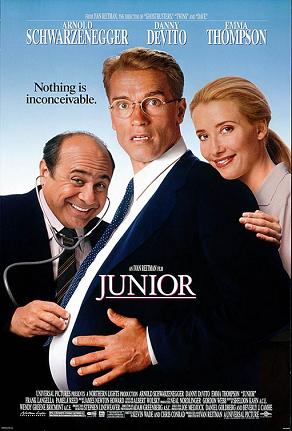 A 1994 film directed by Ivan Reitman, starring Arnold Schwarzenegger as a scientist who gets pregnant.

No, really. Arnold plays Dr. Alexander Hesse who, with his partner Dr. Larry Arbogast (Danny DeVito), develops a drug that is supposed to help against miscarriages. After being denied research funding and a test subject, Alexander agrees to carry the baby after some convincing from Larry. Although it was initially to be a three-month test, he ends up carrying the baby to full term.

No, really. He gives birth and everything. We get to see him all the way through the pregnancy. It's played mostly straight, but at least gives a somewhat interesting Character Development by breaking Alexander out of his shell. The baby also has a mother, Dr. Diana Reddin (Emma Thompson), who had (unknowingly) donated the ovum. Alexander and Diana start an unconventional family by the end.