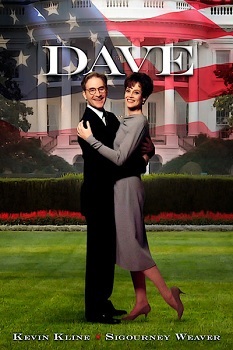 "You don't really know how much you can do until you stand up and decide to try."
—Dave Kovic
Advertisement:

Dave is a 1993 comedy film produced and directed by Ivan Reitman. More or less, it's The Prisoner of Zenda updated to the modern-day United States.

The President of the United States is Bill Mitchell (Kevin Kline), a corrupt career politician who works closely with his equally corrupt advisors, especially Chief of Staff Bob Alexander (Frank Langella). Meanwhile, Dave Kovic (also Kline) is a Nice Guy Everyman who happens to look exactly like the President, and has a side job impersonating him at parties. One day, Dave is hired as a Body Double to cover up one of Mitchell's extramarital affairs. But when the President suffers a debilitating stroke, Bob Alexander hatches an outrageous plan: push Dave to continue the impersonation until Alexander can get himself named Vice President. Alexander assumes this naive outsider will be easy to control, but then Dave starts Becoming the Mask...

The rest of the main cast includes Sigourney Weaver as the socially conscious First Lady; Kevin Dunn as another advisor in on the conspiracy, albeit reluctantly; and Ving Rhames as a Secret Service agent. A young Laura Linney plays the Sexy Secretary that the real Mitchell was bonking when he had his stroke.