Film / Daughters of the Dust 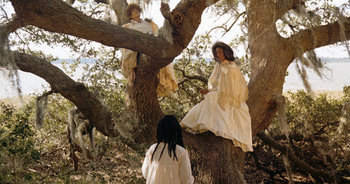 "We are as two people in one body. The last of the old, and the first of the new."
Advertisement:

Daughters of the Dust is a 1991 film written and directed by Julie Dash.

It is set among the Gullah people of the Sea Islands off the coast of Georgia and South Carolina—an isolated and unique culture preserving its own dialect and African-American traditions. As the film opens in 1902, the Peazant family has already lived on St. Helena Island for decades. However, the whole family is on the verge of leaving the island and journeying north in search of jobs and economic opportunity. Viola and "Yellow Mary" are cousins returning to the island for a visit; Viola is a conservative Christian while Mary is a free spirit who has brought her lesbian lover along with her. Nana Peazant, the matriarch of the clan, is a guardian of the old traditions. Another cousin, Haagar, lives on the island but has contempt for the old ways and yearns to move to the mainland and live a more modern life.