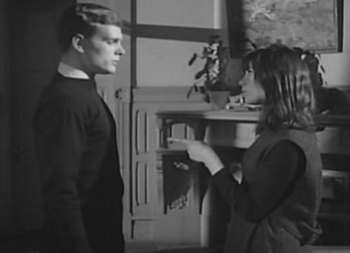 David and Lisa is a 1962 drama from the husband-and-wife team of Frank Perry (director) and Eleanor Perry (writer), based on Lisa and David, a story by psychiatrist Theodore Isaac Rubin inspired by actual patients.

David Clemens (Keir Dullea) is a brilliant-but-troubled high school student, suffering from an obsessive-compulsive disorder so severe he's afraid that he'll die if someone else touches him. His mother sends him to a residential treatment facility for teens, where he's placed under the care of understanding psychiatrist Dr. Alan Swinford (Howard Da Silva). David's anti-social nature and aloof personality leads most of the facility's other residents to leave him alone, but one other patient starts initiating contact with him: Lisa Brandt (Janet Margolin). Lisa is one of the home's most extreme cases. She suffers from heavy schizophrenia. She only talks in rhymes, when she talks. Much of the time she transforms into Muriel, an alter ego who can only communicate through writing.

Through his time spent with Lisa and his sessions with Dr. Swinford, David starts to show progress in dealing with his anxieties, but all that work threatens to become unraveled when his overbearing mother and ineffectual father decide to bring him back home.

One of the first American independent films to garner both critical acclaim and financial success (it earned $2 million on a $185,000 budget), David and Lisa earned Academy Award nominations for directing and screenplay, and brought overnight attention to Dullea and Margolin. It was later adapted into a stage play by James Reach, and in 1998 Oprah Winfrey produced a made-for-TV remake starring Lukas Haas and Brittany Murphy.