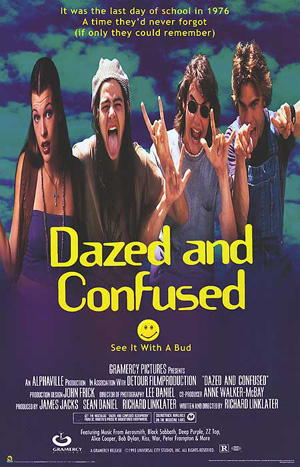 "All I'm saying is that if I ever start referring to these as the best years of my life - remind me to kill myself."
— Pink
Advertisement:

Austin, Texas, 1976: It's the last day of High School, the seniors are hazing the incoming freshmen, and Kevin has decided to throw a kegger. One freshman, Mitch Kramer, is taken under the wing of Randall "Pink" Floyd, a senior. Meanwhile, a group of nerdy friends, Cynthia, Mike, and Tony, decide to go make their last day one to remember. The two stories dovetail at the party.

The title of the film is derived from the Led Zeppelin song of the same name. Linklater approached surviving members of the band for permission to use their songs in the movie, but, while Jimmy Page agreed, Robert Plant refused.