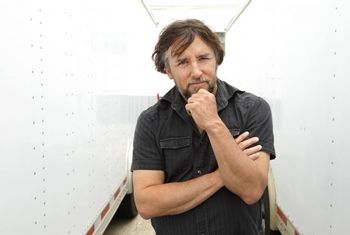 Rick's feelin' a little Dazed and Confused...
Richard Stuart "Rick" Linklater (born July 30, 1960) is an American filmmaker based out of Austin, Texas. He is, along with Steven Soderbergh and Kevin Smith, considered one of the most important figures in the American independent film industry. His career began with Slacker, a very low-budget ensemble film about twenty-something misfits in Austin. The film was met with critical acclaim, and Kevin Smith says it was what inspired him to make Clerks. His second film, Dazed and Confused is a cult classic and equally acclaimed. From there, his career is, to say the least, eclectic. He's done two experimental animated films (Waking Life and A Scanner Darkly), studio comedies (School of Rock, Bad News Bears), smaller Indie movies (Fast Food Nation, Before Sunrise and Before Sunset), and an ambitious project called Boyhood, which was filmed over a period of over 10 years, detailing one young man's childhood from elementary school to high school graduation, with each grade's story being written and shot over a few weeks each year until the project was completed. However, present in all his films is an underlying humanist streak done in a simple, yet effective style.