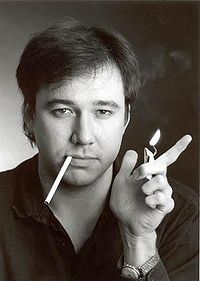 "I don't mean to sound bitter, cold, or cruel, but I am, so that's how it comes out."
See, I think drugs have done some good things for us. I really do, and if you don't think drugs have done good things for us, do me a favor. Go home tonight and take all your albums, and all your tapes, and all your CDs, and burn 'em, 'cause you know what? The musicians who made all that great music that's enhanced your lives throughout the years? R-r-r-r-r-r-r-real fuckin' high on drugs.
Advertisement:

William Melvin "Bill" Hicks (December 16, 1961 — February 26, 1994) was an American stand-up comedian, born in Georgia and raised in Texas from the age of 7. He began his stand-up career in the late 1970s, having grown up a big fan of Woody Allen and Richard Pryor, and would often sneak out of the house to perform sets at local clubs. His rebellious, free-thinking attitude was obvious at a young age, to the point that his parents actually brought him to a psychoanalyst at age 17; the analyst actually sided with Bill.

His love of recreational drugs took a toll on his finances, but after years of working the nightclub circuit, he finally got his big break on Rodney Dangerfield's Young Comedians Special. From there he moved to New York City and began performing 300 times per year for the next several years. He developed a habit of chain-smoking while on stage, which worked its way into his act almost immediately. In 1989 his first video, Sane Man, was released. In 1990 his first album, Dangerous, hit the shelves, and a television special, One Night Stand, came out that same year. Despite the exposure, Hicks never quite broke through like his contemporaries, such as Sam Kinison, but he did gain a big following in the UK, where he taped another special, Revelations. On this special, he debuted his now-iconic "It's Just a Ride" speech to close the show.

Bill was part of a particularly infamous moment in late-night talk show history, with his aborted final appearance on Late Night With David Letterman in 1993. The material in his five-minute set included some cynical material about the pro-life movement, which afterward led to the entire set being pulled from the air. To say Bill was displeased would be a massive understatement, and he made no secret of his bitter feelings afterward. This came shortly after Bill's diagnosis of pancreatic cancer. Despite this, he continued performing at his usual rate until he finally went home to be with his parents in Little Rock, Arkansas in early 1994, where he passed away. Years later, in 2009, Letterman expressed regret over the incident and even invited Bill's mother on the show to watch the clip being broadcast at last.

Hicks' caustic style of observational comedy focused mostly on his (very) low opinion of society and the media, with venomous attacks on politicians and shallow pop culture. He also covered his own personal habits and problems (most notably his addiction to cigarettes) and made frequent mention of his mushroom-induced psychedelic experiences.

A documentary film about his life, entitled American: The Bill Hicks Story, was released in 2010.

Due to a personal rift between Hicks and Denis Leary, fueled by allegations of plagiarizing Hicks' material, it's best not to mention Leary around fans of Hicks.

Hicks and his comedy provide examples of the following:

Here is my final thought. (Oh, thank God.) About drugs. About alcohol. About pornography, whatever that is. What business is it of yours what I do, read, buy, see, or take into my body, as long as I do not harm another human being on this planet? And for those of you out there having a little moral dilemma in your head about how to answer that question, I'll answer it for ya: None of your fucking business.