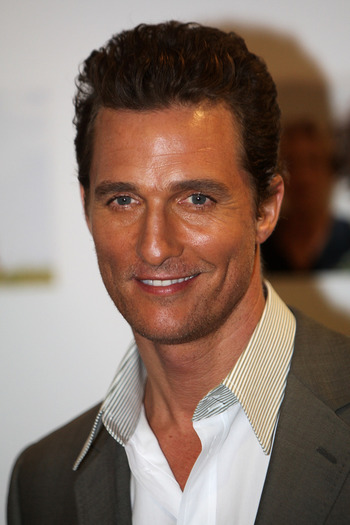 Matthew David McConaughey (born November 4, 1969 in Uvalde, Texas) is an American actor best known for his roles in Romantic Comedies and a particularly epic Career Resurrection. After a series of minor roles in the early 1990s, McConaughey gained notice for his breakout role in Dazed and Confused (1993) and A Time to Kill in 1996. However, after that he starred in a series of box-office disappointments, with critics and audiences alike dismissing McConaughey as nothing more than a pretty boy actor.

And then he accepted the titular role in William Friedkin's black comedy, Killer Joe. The character was a role that was so against the type he normally played that everyone started taking interest in McConaughey. What started out as a shocking example of He Really Can Act turned into one hell of a Career Resurrection (styled as the "McConnaissance") which contained movies such as Magic Mike and Dallas Buyers Club (for which he won the Best Actor Academy Award) and the HBO anthology drama True Detective.

Offstage, he's noted as a big fan of the Texas Longhorns, the sports teams representing his alma mater of the University of Texas at Austin. Near the end of 2018, UT named him as "Minister of Culture" for its new basketball arena set to open in 2022. He also began teaching a film class there for the Fall 2019 semester. Then, in August 2019, he was announced as one of several new minority owners of Austin FC, which started play in Major League Soccer in 2021.