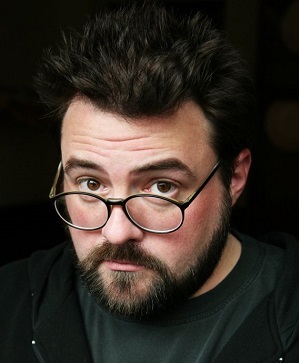 "Storytelling is my currency. It's my only worth. The only thing of value I have in this life is my ability to tell a story, whether in print, orating, writing it down or having people acting it out."
Advertisement:

Kevin Patrick Smith (born August 2, 1970) is an American film director, screenwriter, actor, comic book writer, podcast host and comedian best known for his "View Askewniverse" films, notably Clerks, Chasing Amy and Dogma. Smith is a proud native of New Jersey and most of his films take place in the state. He married journalist Jennifer Schwalbach in 1999. They have one daughter, Harley Quinn Smith (yes, named after the Batman: The Animated Series character; he is close friends with writer Paul Dini).

Smith got his start by making Clerks, a black and white film shot on location in the scenic convenience store where he worked at the time and financed by maxing out his credit cards and putting his comic book collection up for collateral. It starred various lifelong friends and local amateur actors, notably childhood friends Jason Mewes and Jeff Anderson. Released in 1994, Clerks became an instant cult favorite and one of the pioneers of the independent genre.

Smith also jump started the careers of two of his friends, Jason Lee (who before Mallrats was one of the most well known professional skateboarders in the country) and Ben Affleck by casting them in major roles in Mallrats and Chasing Amy before they both went off to fame and fortune (both would appear in all of Smith's other Askewniverse movies).

He is well known for being extremely approachable and friendly towards his fans; often he will take time after his appearances at comic book conventions and the like to sign autographs and chat with fans for multiple hours. Noted for holding detailed audience Q&A sessions, initially attached to his movies, he discovered that people would pay to come to an auditorium and listen to him tell stories and answer audience questions without any context. Hence, An Evening with Kevin Smith led to sequels An Evening With Kevin Smith 2: Evening Harder, Sold Out: A Threevening With Kevin Smith, Kevin Smith: Too Fat for 40 and Kevin Smith: Burn in Hell. He was one of the first film directors to have a major internet presence, going all the way back to the mid-90's.

Currently, he can easily be found on either his twitter page

or his official message board

Works Smith has been involved with:

Most of Smith's uses of tropes can be found on The View Askewniverse page, but some of his trope use is broader than that. They are: