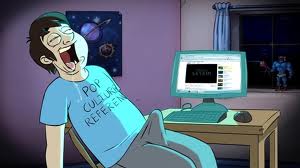 It's never shameful to admit one's feelings about

For some reason, geeks like to make jokes that geeks actually have sexual arousal about their geek interests. Not sex or fetishes, this is about the latest technology or something like that. Basically, it's the geek factor that is turning them on. If the thought of Wonder Woman fighting Storm turns someone on because it would be an awesome comic, and not because it's two hot chicks fighting, you have this trope.

Just one of the many ways TV Tropes Will Ruin Your Life. Also, some of the examples would be Not Safe for Work.

This also doesn't count if a guy just has raging hormones and gets erections at anything, nor does it count if it's merely Squee or And the Fandom Rejoiced. There has to be implications of sexual arousal.

This can happen even when Nerds Are Virgins.

Compare with Geeky Turn-On, Squee, Why Don't You Marry It?, Awesomeness Is Volatile.