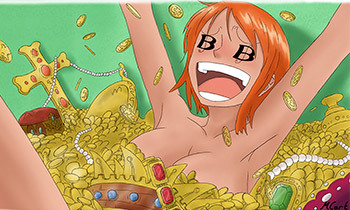 It usually isn’t this literal.
"Good evening, and welcome to The Money Programme. Tonight on The Money Programme, we're going to look at money. Lots of it. On film, and in the studio. Some of it in nice piles, others in lovely clanky bits of loose change. Some of it neatly counted into fat little hundreds. Delicate fivers stuffed into bulging wallets. Nice crisp clean cheques. Pert pieces of copper coinage thrust deep into trouser pockets! Romantic foreign money rolling against the thigh with rough familiarity! Beautiful wayward curlicued banknotes! Filigreed copper plating cheek by jowl with tumbly hexagonal-milled edges rubbing gently against the terse leather of beautifully balanced bank books! ... I'm sorry, but I love money."
— The Money Programme, Monty Python's Flying Circus
Advertisement:

Some people just really love money. Not wealth for the luxuries or the power. They love money itself, to the point they have a Money Fetish.

Okay, not to the point they actually get turned on by it (usually). They just like feeling it, bathing in it, tasting it, listening to it, sleeping on it, diving around in it like a porpoise, and burrowing through it like a gopher. It could be coins, jewelry, paper money, or all three. Either way, these characters treat money itself as a luxury to enjoy. They might break into a Money Song.

Often occurs as part of an If I Were a Rich Man fantasy sequence. See also Conspicuous Consumption and Money to Throw Away.

However, he goes on to suggest that he gets off on schemes and manipulations even more than on the money itself:
I glory
More in the cunning purchase of my wealth
Than in the glad possession.