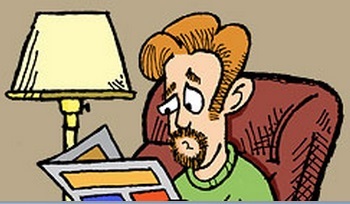 Josh, depicted here reading the comics so we don't have to.
Advertisement:

A blog started by Josh Fruhlinger in July 2004, under its original title, I Read The Comics So You Don't Have To (a Boston-area newspaper that featured a similarly-titled column forced the name change). In it, Josh selects several newspaper comic strips every day and offers (usually sarcastic) commentary on them.

Over time, the blog has developed a great deal of media attention as the authors of many comics have discovered it. Some comic artists or writers are even fans of the blog, including Chris Browne (Hägar the Horrible), Mark Tatulli (Liō, Heart of the City), Francesco Marciuliano (Sally Forth and also the web comic Medium Large), Ed Power (My Cage), "Jumble Jeff" Knurek (the Jumble puzzle/comic), James Allen (Jack Elrod's assistant/successor on Mark Trail), and Bob Weber, Jr. (Slylock Fox). Marciuliano, who is also registered on the boards, even created a logo for the site (and the image for this page) during a major site redesign in early 2010. Also, Bob Weber has actually used the blog to sell official Slylock Fox merchandise directed at the adult fans of his strip.

Josh has also developed a great deal of Running Gags within the blog, including Aldo Kelrast, a character in Mary Worth, whose storyline became one of the strip's most popular after Josh began joking about it. Archie has even made reference to one of the blog's running gags. He also coined the trope name Nephewism.