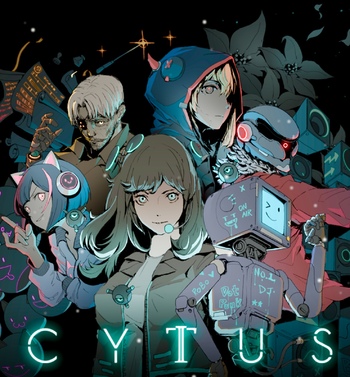 Cytus II is a rhythm game by Rayark Games, makers of Sdorica and Deemo. It is the sequel to Cytus, and released on January 17, 2018 for iOS and March 7 that same year for Android.

As with its predecessor, gameplay consists of tapping, dragging, holding, and now flicking notes to the rhythm of a song when the scan line passes over them. There are a few key differences: The scanline can now change speed, hold notes can now continue over to subsequent swipes instead of being restricted to the swipe they started on, the difficulty scale has been expanded, and there is a new difficulty level, Chaos.

Whereas Cytus had a cryptic plot told entirely through vague images hidden in secret songs, Cytus II tells its story more directly: in a world where Everything Is Online, people can connect to the virtual space known as cyTus using a special implant. When the mysterious new DJ superstar Aesir announced the world's first mega virtual concert, a massive wave of excitement shook the whole world, but mysterious circumstances led to the concert's annulation and Aesir never showed up. Six months later, the topic of Aesir-FEST is brought back up, but mysteriously enough there are many different contradictory explanations of the events given. The game has several characters, each representing a different musical style, and playing through their songs causes the story to progress via the iM System, a Twitter-like social media site where the protagonists talk with their fans and each other.