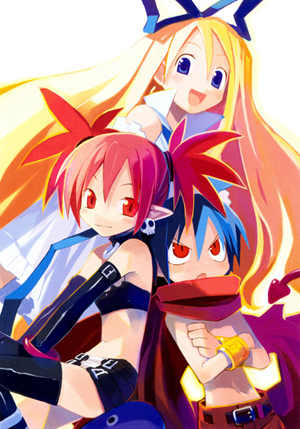 King Krichevskoy, the mighty ruler of the Netherworld...
His long reign came to an abrupt end as the news of his death spread throughout the dark land.
Ambitious demons rose one after another to seize the opportunity, and thus began the age of turbulence and anarchy.
Two years later...
—Opening Monologue
Advertisement:

Disgaea: Hour of Darkness is a Turn-Based Strategy game released by Nippon Ichi in 2003 for the PlayStation 2.

Disgaea details the misadventures of a demonic Evil Overlord (in-training!) called Laharl and his quest to succeed his deceased father as the undisputed ruler of the Netherworld. His main allies in this are his devious number-one vassal Etna, a bubble-headed angel named Flonne (who was originally sent to assassinate him) and an army of exploding penguins called Prinnies. Hilarity Ensues.

It was later ported to the PlayStation Portable as Disgaea: Afternoon of Darkness, which added several of the gameplay improvements from Disgaea 2 and a brand new Alternate Timeline story called "Etna Mode" where Etna accidentally kills Laharl during the first chapter and decides to become the Overlord herself. It was also ported to the Nintendo DS as Disgaea DS, which removed most of the voice acting but added "Prinny Commentary" on most of the cutscenes. A PC port was also released on Steam on 25 Februrary 2016, with higher-res art, and the content from Afternoon of Darkness. The game would eventually gain direct sequels in the forms of the Visual Novel Disgaea Infinite and later Disgaea D2: A Brighter Darkness. A full HD remake entitled Disgaea 1 Complete was released on the PlayStation 4 and Nintendo Switch on July 26, 2018 in Japan and in October 2018 in the rest of the world. Complete was then ported to smartphones in 2020.

For more information on the characters themselves, check out the Disgaea Character Sheet.

Flonne sneaks through the Overlord's castle while making her own sound effects, only getting as far as she did because the guards were too busy partying.

Example of:
With Catlike Tread

Flonne sneaks through the Overlord's castle while making her own sound effects, only getting as far as she did because the guards were too busy partying.