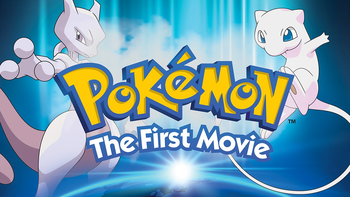 To be fair, Pokémon: The Second Movie was already out in Japan.
"I mean, how cocky do you have to be to literally call your first movie THE FIRST MOVIE? It's like they knew they were gonna have a bajillion sequels so they decided to call it the FIRST movie just to make it easy for us. That's like naming the first Lord of the Rings movie, 'Lord of the Rings: Don't Worry, We're Gonna Have a SHIT Load of Sequels.'"
— The Nostalgia Critic on Pokémon: The First Movie
Advertisement:

Most franchises with Numbered Sequels are like this: The first ever made has a title and the sequels just add numbers and/or subtitles in front of the title, like this → "Title", "Title 2", "Title 3", and if it's a prequel, sometimes it's "Title 0".

But an unusual case is when the first one is literally numbered the first, like "Title 1", or "Title One", or "Title I", or "Title: Part 1/One/I" or "Title: The First"; obviously, this is a sign that sequels are planned, or in development or even ready, thus avoiding Sequelitis.

And of course, the worst part of this trope is when a sequel is never made and the first one remains as the only one.

Sometimes we're talking about a work Divided for Publication; if it has a "Part 1/One/I" in the title because they want to divide a single story in parts to make it easier to follow or fit in the time schedule, keep that clear. There are also cases of when the title didn't have it originally, and then it was added as a Retronym; when adding examples, keep clear which titles were always called like this and which ones were renamed after the fact.

A subtrope of Title by Number. See also The Original Series.

It's a common practice in Fan Nicknames, but they don't count here.