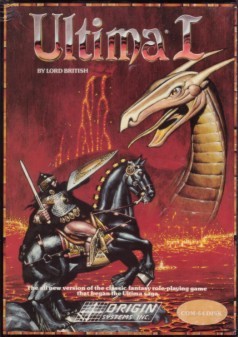 "Thou hast saved the princess. She giveth thee 500 hit points, pence and experience points. She informs thee that thou art now ready for time travel, and that there is a time machine far to the northwest!"
Advertisement:

The first game in the Ultima series, later subtitled The First Age of Darkness. Released in 1981, it is largely a Video Game Remake of Akalabeth, a simplistic Dungeon Crawler game generally considered to be "Ultima 0". The evil wizard Mondain, using the aptly-named Gem of Immortality, has terrorized the land of Sosaria for over 1000 years. His monsters roam the lands freely, and none, not even the mighty Lord British, can hope to oppose him. It seems as if the bad guy has already won.

In desperation, a lone hero, known as "The Stranger", is summoned from another world. He must gain favor with the kings and princesses of the land, defeat Mondain's hordes, and travel from darkest dungeons to deepest space, and even through time itself, to defeat a seemingly unstoppable threat. Will he succeed?

Though the game is simplistic by modern standards, it's an important stepping stone not only in the development of the (better-known) later games in the series, but for western RPGs in general.