In many senses the Trope Maker of the computer Role-Playing Game, Ultima is a long-running series of CRPGs created by Richard "Lord British" Garriott and Origin Systems that, along with Wizardry, more or less defined most of the classic computer role playing game tropes, going on to influence games more broadly. Though the series was computer-based, its general mechanics became likewise imprinted on the console RPG market thanks to its influence on the mechanics of the Dragon Quest franchise (and via osmosis, to a lesser extent the Final Fantasy franchise). Ultima IV and VII, in particular, had a major influence on general RPG mechanics and open-world games, respectively.

Overview of the Ultima series 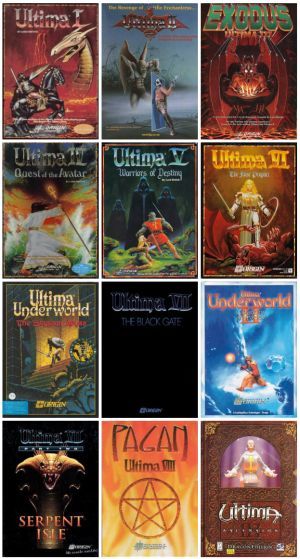 The Ultima saga begins, it is generally considered, with a primitive Dungeons & Dragons-inspired game called Akalabeth (also referred to as "Ultima 0"), which introduced the character of Lord British, king of a pastiche medieval/high fantasy type world. Originally titled "D&D28b", as it was Garriott's 28th game, Akalabeth was also heavily influenced by J. R. R. Tolkien's The Lord of the Rings books; the name Akalabeth itself derives from Akallabêth, the fourth part of The Silmarillion. The game was hand-coded entirely by Garriott in Applesoft BASIC.

The Age of Darkness

The world of Akalabeth was fleshed out to form "Sosaria", the setting of Ultima (later subtitled The First Age of Darkness). Its plot saw an Evil Sorcerer named Mondain defeated by The Hero known as "the Stranger from another world".

The series continues with Ultima II: The Revenge of the Enchantress, as space-time distortions threatening Earth are Best Served Cold by Minax, the jilted widowed lover of the first game's last villain. Time Travel is required to save the day.

The series started to find its legs in Ultima III: Exodus, in which the evil robotic child of the previous two villains wreaks havoc across Sosaria. This game started laying the foundation of RPG elements such as towns, overworld, dungeons, and monster encounters in the way many video game RPGs came to emulate. This is the one that specifically influenced the creation of Dragon Quest I, and thus unintentionally spurred the birth of the Eastern RPG.

The Age of Enlightenment

But when people speak of the Ultima series, its tropes and mechanics, they tend to think of the next three games in the series, Ultima IV, V and VI, collectively called the "Age of Enlightenment". In these games, "the Avatar"—indicated to be the self-same "visitor from our world" as in the first three games—becomes a key player in upholding Britannia's virtue and keeping the world safe.

With the unification of Sosaria under the rule of Lord British—another visitor from "our" world,—the place was renamed "Britannia". After the fairly cataclysmic events which ended Ultima III, the whole world was largely rebuilt, and its geography and culture would remain more or less unchanged for the rest of the series history. (As a result, the cloth maps given out as Feelies for some releases of the games can be used for any game in the series.)

Ultima IV: Quest of the Avatar sets the player out on a quest, essentially, to bring virtue and general goodness to the land—the main objective of the game is, quite simply, to live a virtuous life.

In Ultima V: Warriors of Destiny, the Avatar must once again journey to Britannia, to reclaim Lord British's throne from an usurper.

The last game of this era, Ultima VI: The False Prophet, deals with some of the long-term consequences of the events of Ultima IV. The Avatar must this time save his own life from the gargoyles, whose ancient and infallible prophecies tell them that he will one day destroy their race. (Also, they're pissed off that the Council stole the Codex of Ultimate Wisdom two games ago.)

The Age of Armageddon

The third age of Ultima, "The Age of Armageddon", is a mixed bag, despite considerable technological improvement (although VII ended up having an enormous influence on the concept of open-ended, open-world RPGs). In all three, the Avatar battles an other-worldly being called "The Guardian".

Ultima VII: The Black Gate pitted the Avatar against a cult seeking to allow the megalomaniacal "Guardian" into Britannia, and is often considered the best game of the entire series.

Ultima VII Part 2: Serpent Isle featured the Avatar returning to one of the lands from Ultima I that is now a separate world.

Each of these games had an expansion pack that added new sub-quests and locations to the game.

Ultima VIII: Pagan follows on from Serpent Isle. The titular "Pagan" is a very different world from Britannia, to which the Avatar has been banished by the Guardian. Pagan lacked the Britannian virtues, and while there, the Avatar found himself forced to violate them as well, eventually sacrificing that entire world.

Ultima IX: Ascension is the last canonical Ultima game (though some fans say otherwise). It changed things even further, replacing the traditional tile-based top-down (later isometric) display with a standard 3rd person 3D view, and made numerous deviations from the canonical series history. The Avatar was summoned one final time to Britannia, where the Guardian has resurfaced and totally corrupted the hearts and minds of the people (not to mention the code of the game), perverting the traditional virtues.

A number of other Ultima games exist:

Ultima Underworld was a sub-series of first-person RPGs taking place in the Ultima universe. They were developed by Looking Glass Studios, and spawned the Immersive Sim genre.

The Worlds of Ultima sub-series consisted of two games, the first set in a prehistoric land, and the second on a Victorian sci-fi take on Mars; both took place outside of the main continuity. They used the Ultima VI engine

Ultima: Escape from Mt. Drash was a dungeon-crawler, and came out between Ultima II and III. Richard Garriott was not directly involved in it, but despite a common myth

, he actually did agree to his friend Keith Zabalaoui (the programmer of the game) and Sierra using the trademark "Ultima" to help promote the game. It didn't (not that Sierra had any high hopes for it), and Garriott left to found his own company, Origin Systems, shortly after finishing Ultima III.

Ultima Online was a Britannia-based MMORPG, and the first large-scale MMORPG success.

There were also two aborted MMOs that would have followed: Ultima Worlds Online: Origin and Ultima X: Odyssey, the latter of which was intended to be a direct continuation of the storyline of Ultima IX and among other things

, was to have incorporated the Virtues of Ultima as a significant gameplay mechanic.

Ultima Forever: Quest for the Avatar was a freeware multiplayer game for the PC and iPad, based primarily on the setting of Ultima IV, with a few changes. For example, Lord British is now Lady British, since Garriott didn't give permission to use the character. Announced in July of 2012

and created by BioWare, Ultima Forever was released for iOS in 2013, and was shut down in August 2014.

Meanwhile, Garriott himself announced plans to produce an MMO Spiritual Successor, Ultimate RPG. He's also expressed possibly buying the rights to the series back from EA and releasing it as an actual Ultima Online 2.

Garriot eventually turned to Kickstarter to fund Shroud of the Avatar: Forsaken Virtues, a Spiritual Successor to both the classic single-player Ultimas and Ultima Online, and closed with a respectable $1.9 million.

Akalabeth was first self-published by Garriott, then picked up California Pacific Computer; Ultima was originally released by California Pacific; Ultima II and subsequent re-releases of the first Ultima (retitled Ultima I: The First Age of Darkness) were published by Sierra On-line. Ultima III through Ultima VII were released by Origin (a company formed by Garriott after he became dissatisfied with Sierra), and the remaining games were released by Electronic Arts (which bought Origin).

While Garriott no longer owns the rights to the games, and is no longer with EA/Origin, he still holds the copyright of several characters, and therefore future Ultima games can only be made if EA and Garriott can be persuaded to get along with each other.

Some Notes on Availability

Origin released Ultima IV as a freely-distributable download on the internet. A free version updated for modern systems exists.

All nine games of the main series (with the first six bundled into two trilogy packs), both Underworld games, and the Worlds of Ultima series are available from GOG.com for a quite reasonable price (some even for free).

done with the Dungeon Siege engine. Featuring lots of added content like extended side-quests, an optional, alternate main quest for evil-inclined players, and an improved class and skill system.

. While it wasn't made by the same team, it nevertheless uses the same basic engine, and has gained just as much praise, if not more so, than the Ultima V remake.

And finally, there's Exult, a reverse-engineered reimplementation of the Ultima VII engine that can either use the data from the original games (Ultima VII and U7-2: Serpent Isle) or can be used with Exult Studio to create new games. It was originally written to allow Ultima VII to be played under Unix, but it's now cross-platform and adds some new features, both cosmetic and gameplay-affecting.

Games within the Ultima series

Major tropes and elements of the Ultima series include: