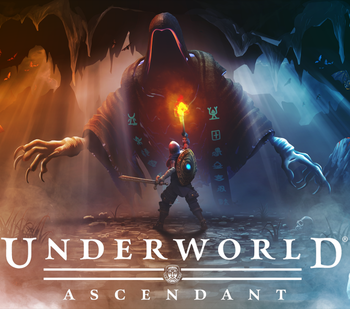 Underworld Ascendant is a first-person Action RPG/Immersive Sim developed by OtherSide Entertainment, a US-based indie studio comprised of former Looking Glass Studios personnel, and published by 505 Games. It is a Spiritual Successor to the Ultima Underworld series and ties in with Shroud of the Avatar, a Spiritual Successor to Ultima itself. It was Kickstarted in February-March 2015

You play as "the Avatar" (referred to in-game by the legally distinct name "The Ascendant"), a regular shmoe from Earth, and find yourself transported to a massive underground realm called "the Stygian Abyss" through a magical portal called a Rune Gate. Trapped in this magical setting, you have to carve out a place for yourself among rising tensions between the three local factions of the dark elves, dwarves, and mushroom-like shamblers.

Tropes to be found in the game include: