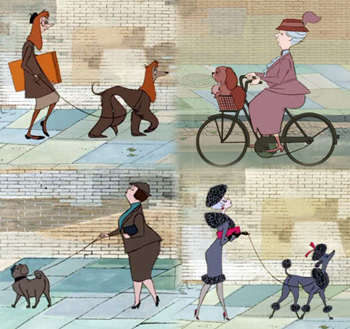 There's a saying that pets tend to look like their owners. Whether this is true in reality is obviously very debatable, but the magic of fiction allows this to be very true in media. Pets tend to take after their owners, both personality-wise and/or appearance-wise. "Pet" is a broad term here, including mounts, familiars, and mons.

People have pets of the same sex as themselves more often than not. The two may also be alike in coloration. Alternatively, the color of the mount may say something about the rider by way of color symbolism.

The two are alike in personality. Such pets are typically a metaphorical extension of their person, serving as a foil. This over caries over into the trope Empathy Pet. They may share a special bond, sometimes even taken up to eleven in the form of a Psychic Link.