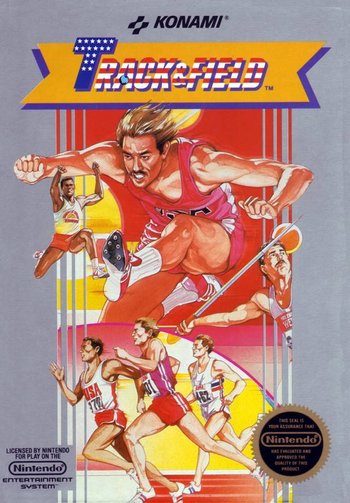 A series of sports games by Konami in which players can compete to set world records in various athletic events by mashing buttons.

The original Track & Field arcade game released in 1983 (known as Hyper Olympic in Japan). It and its close sequel Hyper Sports were notable for their lack of directional controls; each playernote (up to 4 could play, but only 2 simultaneously) had three buttons, two for running and one for jumping/throwing. Since the Atari 2600 joystick only came with a single button, the 2600 version of Track & Field was bundled with a special three-button controller. However, the Hyper Shot controller reduced the number of buttons it took to play the MSX and NES versions of Track & Field and Hyper Sports to two.

Not only do different games in the series have different selections of events (though most begin with the 100 meter dash and the long jump, with other decathlon events coming later), but also the same title released on different systems may have added or removed events.