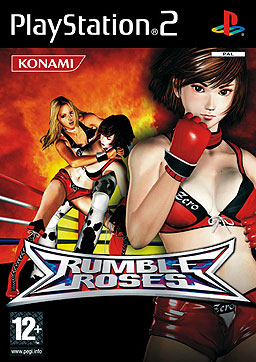 In 2004, Konami decided to put a foot in a genre that is rarely touched by video game companies, the wrestling genre (well, at least outside Japan) which in the last years was in the hands of THQ, the holder of the WWE license. However, to the surprise of many, Konami announced that this game would feature an all female cast. The end result was a big fanservice extravaganza, with 10 ladies (each with her own face and heel persona) wearing quite revealing outfits, appealing to various fetishes. Aside from these regular in-ring costumes, they would also wear swimsuits for beach-side mud wrestling matches.

The story modes for each wrestler persona are also notable in a B-movie way. But let's go into a little more detail. It's set up more like a Fighting Game than a Wrestling Game. Anesthesia, the Big Bad of the series, wants to take over the world. She plans to use a wrestling tournament to do it, offering a large cash prize to the winner as an incentive. She plans to take the DNA of the tournament winner to make an unstoppable cyborg army. Each of the girls has their own reason for being involved in the tournament. Reiko Hinomoto is trying to live up to her mother's legacy and search for her lost sister. Aisha is obsessed with a rematch against Dixie Clemets, who she was never able to beat. Makoto Aihara is an Olympic judoka seeking competition. Candy Cane wants the cash prize to save the orphanage she grew up in. Miss Spencer enters the tournament accidentally while trying to chase down a recalcitrant runaway student (Candy Cane). Anyway, at the end of the tournament, the player fights one of Anesthesia's cyborgs, Lady X, and whoever wins goes home happy.

As of right now there is one sequel, Rumble Roses XX, which was released in 2006 for the Xbox 360. It introduced three new modes (Tag Team, Queens Match and Street Fight) as well as a very unelaborate create-a-wrestler feature. It also introduced "Superstar" personas for each character's face and heel modes. Unfortunately, it featured no storyline mode at all, and an incredibly labyrinthine and time-consuming method of unlocking characters and rewards. Additionally, the extras like Queens Mode, Street Fight, the shoddy create-a-wrestler system and the playable bear proved very unpopular overseas. While Rumble Roses is generally considered to be a decent game, Rumble Roses XX was enough of a flop that it seems to have brought the series to an end. The series fell into obscurity with the closest to a revival being Reiko making a playable cameo in Super Bomberman R. Additionally, there's also a Japan-only slot machine game titled Rumble Roses 3D.

Tropes that are present in the games: